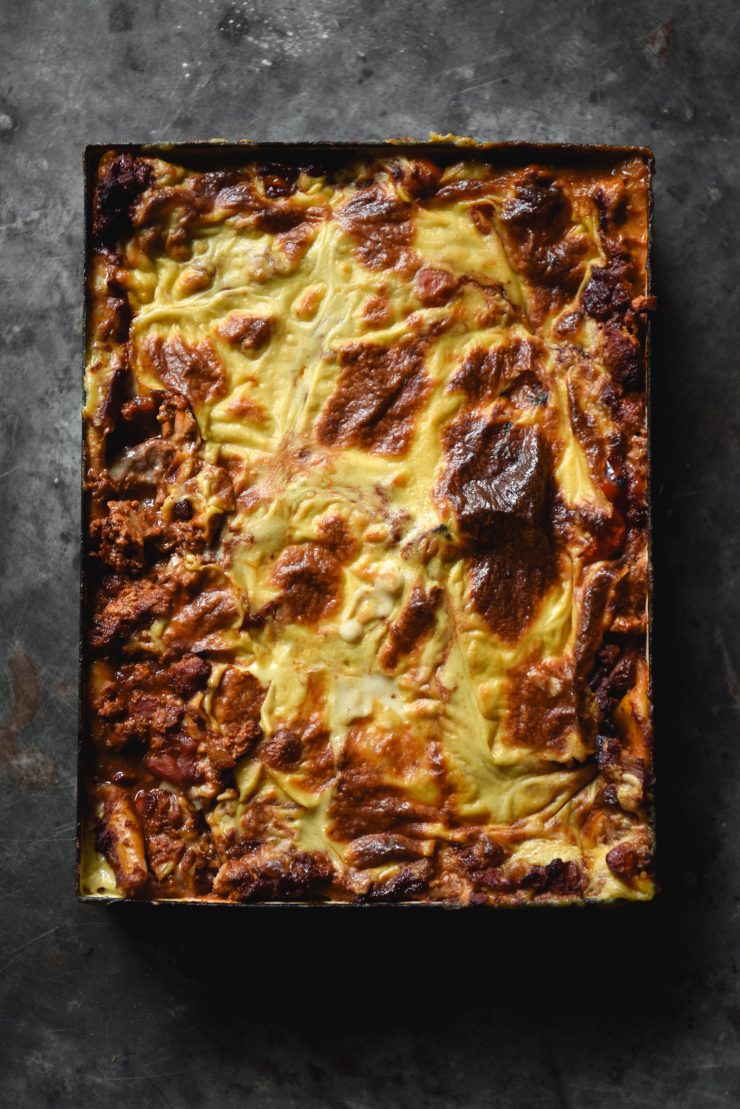 As a single person who cooks for a living, I generally don’t ponder too much about what constitutes an easy make ahead meal. There’s always food available at Casa de George. Upon recent reflection, however, I came to the realisation that I am absolutely the exception to the rule. I love creating extravagant and interesting salads, but the reality of the busy and modern society we live in is that convenience is important.

I’ve been keeping a big ol’ stash of the vegan bolognese in the fridge for weeknight dinners. Why not, I figured, go one step further, and create a FODMAP friendly vegan lasagne with it?

As I’ve mentioned a bunch of times, this lasagne uses the recipe for FODMAP friendly bolognese found here. It is delicious, rich and precisely akin to the original, meaty version. Ain’t nobody going to miss the meat, nor will they miss the garlic and onion. I have used a slightly larger, slightly different version of that recipe here for a full bodied vegan lasagne.

As for tinned tomatoes: there are more than generally would be acceptable for FODMAP purposes. If fructose is an issue, you can use 2 tins of tomatoes and add extra water to loosen the mince as you see fit or make the portion sizes smaller.

To keep the lasagne vegan, I have used a quantity of the white sauce recipe used in both my vegan mac and cheese and cheesy baked hasselback recipes. I decided it was the easiest, simplest way to make a cheesy low FODMAP vegan lasagne. If you’d like to top it with some melty vegan cheese that you like, go right ahead. Again, there’s a section below on my preferred vegan melting cheeses.

The white sauce uses soy milk, gluten free cornflour and nutritional yeast to form a simple, FODMAP friendly cheese sauce. I have found soy milk to be the creamiest option for a good roux, but check that your brand of soy is milk with soy protein and not whole soy beans. Using a milk with soy protein means that the FODMAPs are far less of an issue, as opposed to using the whole bean.

In terms of extra additions, I have kept it pretty simple, with some optional spinach and basil. In a particularly contradictory way (with my tofu bolognese and ‘cheese sauce’) I am a bit of a traditionalist when it comes to lasagne. No pumpkin, no eggplant, no nothing else. Not today sir. You, however, could take a few creative liberties, if you wish.

Sorry, gluten free lasagne sheet makers. No matter what your packets say, I’m yet to find a brand that says ‘ready to use’ and means it. I have fallen victim to the ‘instant use’ tag too many times before. What I end up with is a desert dry lasagne with sheets that have curled up and look like the Opera House. So you don’t suffer the same fate, here are some tips.

How many gluten free lasagne sheets do I need?

I have noticed that basically all gluten free lasagne sheets are different sizes. What’s more, some brands expand length and width wise during the boiling process. Personally, I find it is always prudent to buy double what you think you’ll need. This accounts for different sized sheets, different sized baking dishes and breakages. There is nothing worse than having to go to the shops mid-cook!

Which brand of gluten free lasagne sheets are the best?

I have tried a number of different brands of gluten free lasagne sheets available in Australia. Honestly? My foolproof solution is the San Remo lasagne sheets. They are hardy, easy to find, and stand up well to par-boiling and then cooking. I’ve found other brands can become weirdly starchy and then break up when cooked, but the San Remo tend to work a treat.

Which brand of vegan melting cheese is the best?

Aside from simply omitting the cheese and baking the bechamel top (as in some pictures) I have tested a few vegan cheeses on this lasagne. While I love the taste of vegan cheese, I’ve tested a lot that didn’t melt very well. These are the ones I have treid:

Whichever brand you buy (if you buy any!) I highly recommend buying a block instead of pre-grated. The irony of pre-grated cheese is that it often contains fillers that prohibit it from melting well. Much better off grating your own (there will be less weird stuff in your cheese, too).

I will also say (which people who use vegan cheese will probably know) that you need to blast your oven to get it to melt. Anecdotally, I found that covering the lasagne with foil tended to result in some vegan cheeses cooking solid in their grated form as opposed to melting. I would suggest leaving the foil off for this reason. I would also suggest pre-cooking the lasagne sheets as I have mentioned. This means that the sole purpose of the oven time is to melt the vegan cheese, allowing it to melt as effectively as possible.

How to make vegan mince out of frozen tofu

Freezing tofu expels the moisture from the tofu block, leaving behind the physical product that has been wrung of water. This results not only in a textural change, but also in the ability for the tofu to absorb more sauce and thus flavour.

Frozen and defrosted tofu is texturally very akin to mince meat once cooked. You can also use the process for any tofu dish, torn or not. Marinating the tofu after freezing and defrosting will allow it to infuse with far more flavour than it would otherwise.

Freezing and defrosting the tofu is optional, but it goes a long way in creating a mince-like texture. Make sure you buy completely firm tofu for this purpose – anything less will not work. 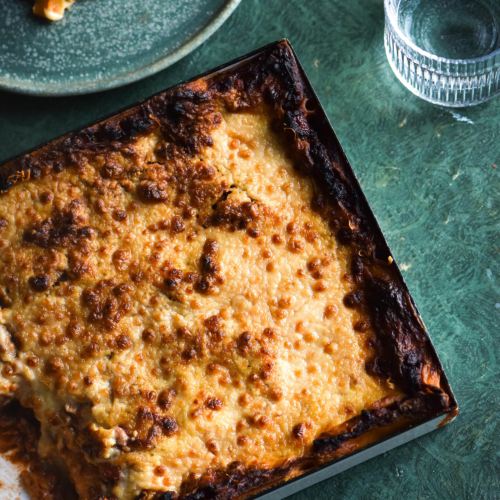 Optional additions to the vegan mince:

For the ‘cheese’ sauce

To make the ‘mince’

To make the white sauce: