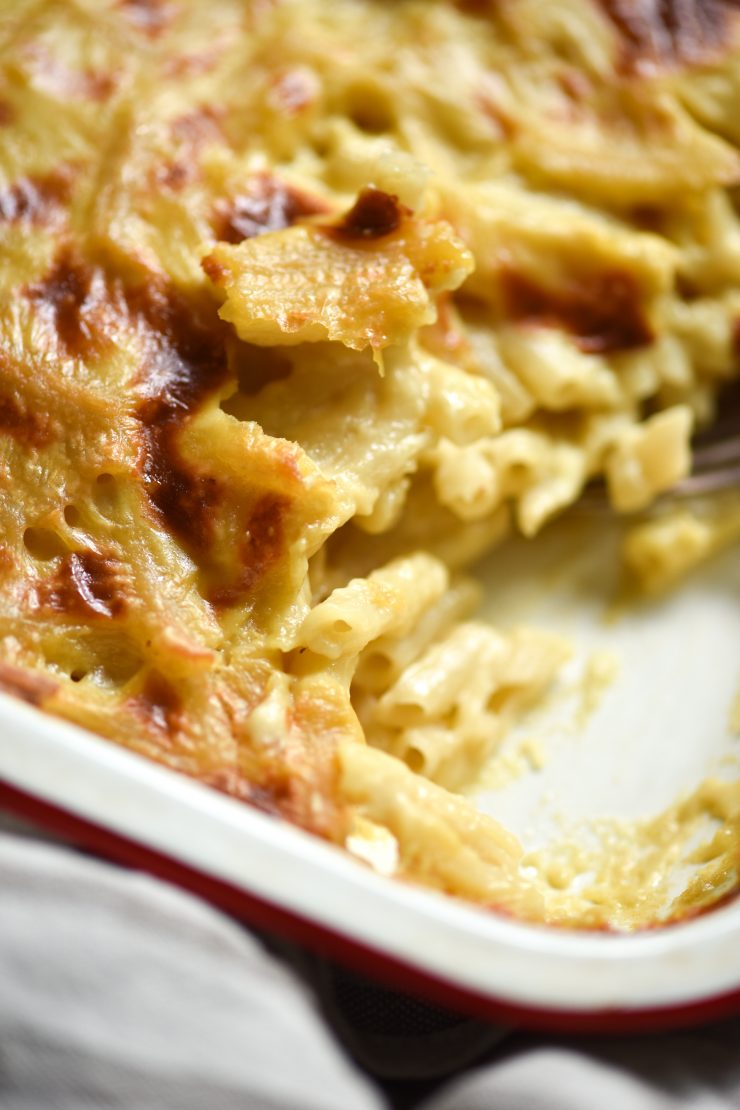 Whenever I’m feeling sorry for my FODMAP self, I think of the low FODMAP vegans. As a general rule, the vegan diet often incorporates a lot of of fruit and legumes – both heavily restricted on the FODMAP diet. If I couldn’t rely on eggs, cheese, and the odd bit of fish, I don’t know where I would be. A whole lot crankier than I currently am, at the very least. So, when I set out to create a gluten-free mac and cheese, I knew it had to be vegan.

A token of appreciation for my FODMAP vegan friends, if you will. A lot of vegan mac and cheese recipe that I’ve come across on the ‘gram rely heavily on cashews and cauliflower, neither of which are particularly FODMAP friendly. Besides, even if cashews were the friendliest FODMAP in the world, ain’t nobody got time for soaking cashews when they’re in the mood for mac n’ cheese. This is a totally cashew-free vegan mac and cheese.

Vegan mac and cheese without cashews

This mac and cheese is vegan, gluten free, FODMAP friendly, easily nut free, and whipped up in about 15 minutes. You can bake it, eat it straight out of the pot, or even use the sauce for lasagne, a vegie bake, or (from personal experience) a toast spread. So damn good.

I’d say this vegan mac and cheese is akin to Kraft Mac and cheese. It is a mild tasting yet satisfying and delicious vegan comfort food.

First and foremost, it’s important to say that this dish doesn’t need to be gluten free if you don’t require it. You can obviously use regular pasta – nothing else would change in the recipe regardless.

I have used a number of different milks for this recipe. In my experience, I’ve found that soy milk made for the creamiest cheese sauce without adding unwanted flavour. My votes go to soy and almond, although if you’re not gluten intolerant you could also try oat milk.

Since I developed this recipe, there have been a lot of advances in vegan butter. I use Nuttelex Buttery because I know it’s easily accessible in Australian supermarkets, but you might have a personal favourite. I have also recently used Naturli and I really enjoyed the flavour and texture. When I can, I plan to get my hands on some Miyokos – I’ve heard great things.

In a similar vein to the last point, vegan cheese is a lot more accessible than it was. The vegan, gluten-free mac and cheese tastes delicious as it is, but you could consider stirring through (or topping) it with some vegan cheese. Make sure it’s good quality and suitable for any dietary requirements you have.

Salt is super important to making this dish taste mac and cheesy. That said, because this is vegan, I recommend adding 1 teaspoon, tasting it and going from there. This is particularly important if you’re adding vegan cheese. You can always add more salt but once you’ve over salted, there’s not much you can do.

If you want to make it into a bake, you could sprinkle some gluten free sourdough breadcrumbs atop and bake in a dish. For a large crowd, I’d probably recommend doubling the recipe.

Similarly to vegan butter, vegan cheese has made many advances in the past few years.

I would recommend googling a list of the best melting vegan cheeses where you live. There are lots of brands available internationally that we can’t get in Australia, so I hesitate to recommend any one brand.

Asides from doing a bit of research on meltiness, I highly recommend grating your own cheese where possible. As with regular cheese, store bought grated cheese can often contain fillers that ironically inhibit it from melting properly. Said fillers can also be irritating to sensitive digestive systems. So! No matter the sort of cheese, grate it yourself where you can.

On the note of grating: use the smallest side of your grater! Small, fine shreds of cheese tend to melt into a nice even cheesy top. Big pieces tend to have their individual outlines showing as they melt. Doesn’t matter if you don’t care about aesthetics, but it does if you do.

One brand in Australia that I have found to be an excellent melting cheese is Notzarella. It’s a coconut oil and soybean based cheese, so it has nothing FODMAP unfriendly.

OPTIONAL ADDITIONS FOR THE VEGAN GLUTEN FREE MAC AND CHEESE

All this chat about vegan cheese brings me to my next point: the optional additions.

I should note that adding vegan cheese is entirely optional. The mac and cheese is still cheesy and delicious without it. In fact, that’s how I developed the original recipe. So if you can’t find vegan cheese near you or you don’t want to add any, no stress.

Light miso paste is another optional ingredient. It adds an umami, parmesan like layer of flavour to the dish. Much like the vegan cheese, though, it’s entirely optional. My original recipe didn’t include it, so you don’t have to either. Note that miso paste adds saltiness, so add less salt to compensate if you do include miso.

Next on the list is Dijon mustard. Just a hint of dijon adds a piquancy akin to a sharp cheese.

If you have any spare pumpkin puree, I love adding around 250g to the sauce once it thickens. It is a yummy and festive addition that also bulks out the vegan mac and cheese.

Finally, truffle oil! Personally I’m a huge fan of a truffle and a truffle mac and cheese. You might not be. This is an entirely optional way to fancy up the dish but absolutely not a necessity.

I learnt this trick when I was working on my vegan gravy recipe. Dry toasting your nutritional yeast in a saucepan before adding it to anything gives it a lovely deep umami flavour. Be careful because it goes from toasty to burnt very quickly. Keep it moving in the dish until it smells fragrant and looks golden brown.

Then, simply add it to the vegan mac and cheese! An easy, cheap and quick way to add extra flavour. 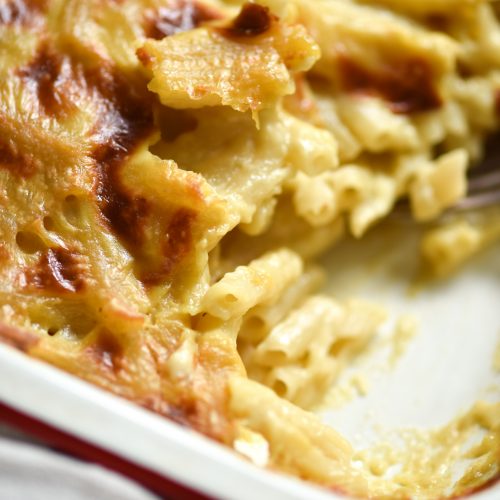 Vegan Mac and Cheese (that is FODMAP friendly and gluten free)

For the vegan mac and cheese:

To make into a mac and cheese bake:

NOTES: I have tried a number of different vegan butters and oils in this recipe, so I thought I’d impart a lil bit of wisdom. At the end of the day, a turmeric coconut oil butter worked well, as did olive oil, if you’re desperate. My favourite was Nuttelex buttery, although you may have your own favourite vegan butter brand. You could hypothetically use butter if you’re not vegan, but then you hypothetically could add cheese as well. Hypothetically, there are better classic roux recipes out there than to substitute into this one.
Tried this recipe?Let us know how it was!