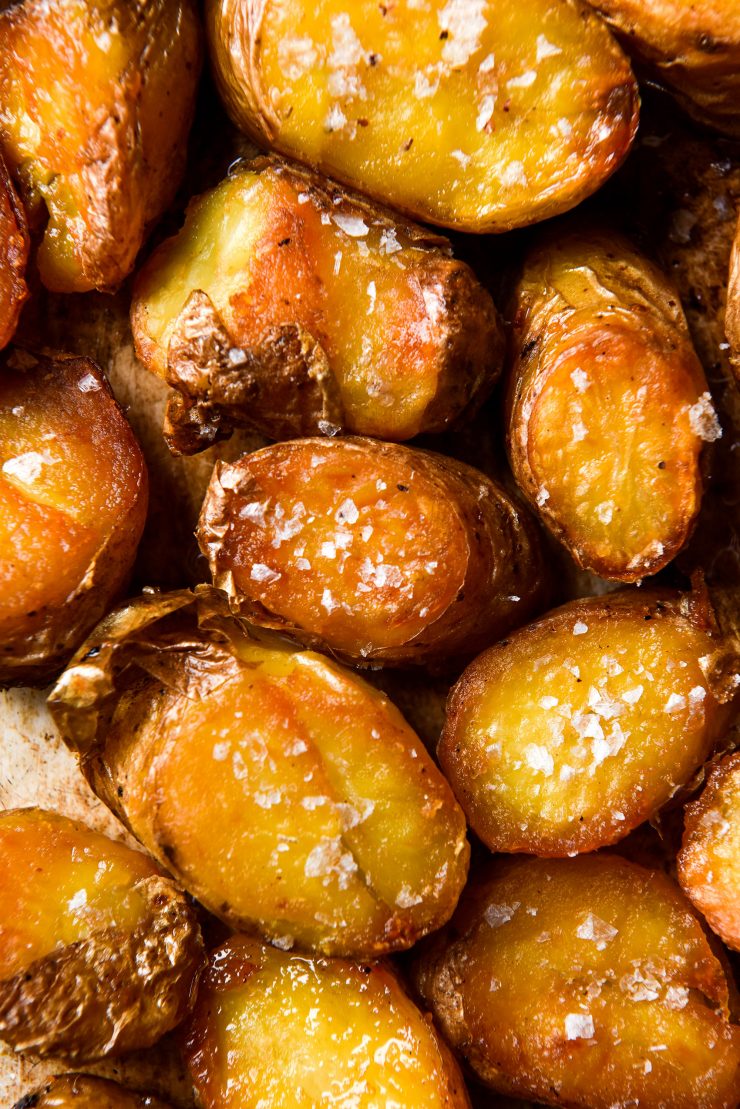 A note, before we begin: this method works for all potatoes. In fact, when I first wrote this recipe many moons ago, I failed to appreciate that a waxy potato like a Kipfler doesn’t roast as well as an all rounder or starchy variety. If you’d like a good guide for a roastie, see this link here.

Should you boil your potatoes before roasting them?

Yes, absolutely. Boiling the potato serves a few purposes: firstly, it flavours the potato flesh with the use of salted water. As the potatoes boil, they absorb the salty water, which equates to more flavoursome roasted potatoes.

Secondly, cooking the potatoes prior to roasting them takes the guesswork out of roasting. You don’t need to balance cooking the insides with crisping the outsides, because they are already cooked. It allows you to concentrate entirely on crispy, golden potato edges.

How to parboil your potatoes

To parboil your potatoes, place them in a pot of very well salted water over a medium high heat. The potatoes should be completely submerged. There’s no exact timing for this process – it all depends on the size of the potato, how full your pot is – any number of variables. Be patient and let the potatoes cook completely. A knife should slide through the largest potato. Gently move them around in the water if some aren’t cooked while some are falling apart. Remove any that risk becoming mash.

How heavily should I salt my parboiling water?

Onto the most important aspect of this part of your potato journey – the salting of the water. I am a diehard potato fan but even I can admit that the flavour of potatoes is subtle (not bland! I’d never say bland!) Because of this, the salting of the water is so integral. Very well salted water will flavour the potatoes from the inside out – every bite will be well seasoned and flavourful. Chemically, salt brings out flavours in food, which is why it’s so important.

What constitutes well salted water? Water that tastes like the ocean. Have a look at how Bon Appetit salt their water, if you need a visual (although keep in mind that they use kosher salt – table salt is more potent, if you’re using it.) Here’s a link to their guide to salting pasta water, which is a similar idea. I realise that they say no table salt, but I say ignore that – people (including me) use it unabashedly.

I promise that even if you baulk at the salt being added, the final result isn’t heavy on salt – just perfectly flavoured. You drain a lot of the salt off in the boiling water, anyway.

Preheating your oven and oil

Once your potatoes are done, it’s time to strain them and allow them to steam dry. Steam drying is basically just the potatoes drying off in their own heat – you don’t need to do anything here. While you wait, preheat the oven to 200 degrees Celsius, or 400 Fahrenheit.

By now the potatoes should have cooled off just enough for you to handle them. If you ar using Kipflers, be gentle. They are a waxy potato, meaning they easily fall apart. Cut them as you see fit, and don’t be afraid to smush them up just a little – craggy edges equal extra crispiness. Some people like to shake them up in a pot after cutting for extra edges. I noticed that using a serrated knife on very well cooked potatoes gave them some extra roughness.

I like to cut my Kipflers on a sharp angle so that as much potato flesh as possible touches the tray. They also look fancy which is an added bonus.

I like to preheat my oil for 5 or so minutes. Then, working quickly, remove the oven tray and gently place the potatoes in the oil. It’s important to give them room and not overcrowd the pan – this will result in less crispy potatoes. It’s also important not to cook anything else in the oven while doing the potatoes. Too much food in the oven will create steam, which is the enemy of crispiness.

It’s a good idea to quickly baste the tops of the potatoes in the hot oil before returning them to the oven – this will prevent tough, dry potato tops. Make sure this is all a quick process so the oil doesn’t drop in temperature too much.

Which oil is best for roasted potatoes?

People have different suggestions as to which oil is best for crispy roasted potatoes. Because they’re cooked at a high heat, it’s helpful to use an oil with a high smoke point. BBC uses sunflower oil for their best-ever roasted potatoes, Heston uses duck fat. I use vegetable oil, because it’s inexpensive and has a higher smoke point than olive oil.

BBC suggested that a mix of rapeseed and butter was good – although it does need to be clarified butter. Something for me to test, AKA a work mandated reason to eat more potatoes. Stay tuned.

How long should I cook my roasted potatoes?

Asking how long to cook your potatoes is like asking the length of string. This depends on so many things – the size of the potatoes, your oven, how well you boiled them, etc. For this reason, I prefer not to give a cooking time. Once you’ve dropped the potatoes in oil and basted them, give them 20-30 minutes on the first side, size dependent.

When the timer goes off, flip the potatoes and cook them for however long you see fit. You don’t want leathery potatoes, but you do want a crispy crunchy crust. If you’re keen to push them to the limits, I recommend a quick baste with the hot oil every once in a while. If you can, keep them in the oven while you do it.

Once your potatoes are crisped to perfection, it’s time to remove them from the oven. You can blot them a little if necessary, but make sure you leave enough oil to allow the salt to cling to them. On that note, salt them pretty much straight away – the salt will adhere so much more efficiently than when the potatoes are cold.

Finally, a wise quote from Heston – roasted potatoes wait for nobody. They need to be brought to the table and consumed straight away for the best impact. Older roasted potatoes tend to become dry and less crispy, so all the other aspects of the meal should be ready to go. And before you ask, no – you can’t make them ahead of time (although I’m working on a ‘holiday potato’ prep post.)  Pop them straight on your fork. 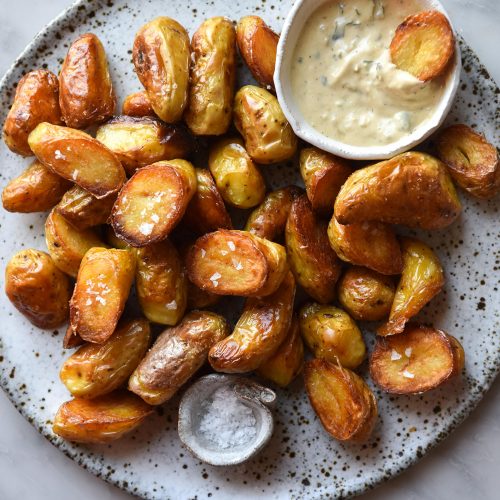