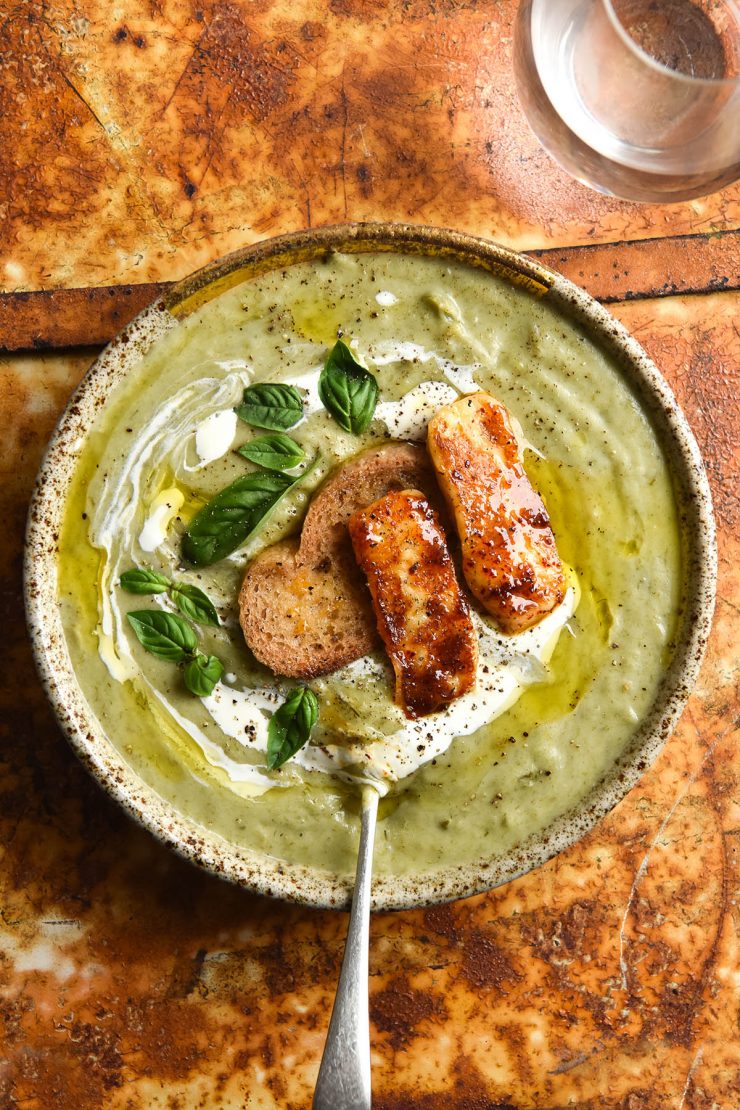 It is officially soup season here in Melbourne, so today we’re talking FODMAP-friendly leek and potato soup. First off: yes, the soup is green. Because the green parts of the leek are the FODMAP friendly part, we use those instead of the whites. Green leeks = green soup.

Digging around the internet, none of the other FODMAP-friendly leek and potato soups are green. I don’t know if I’m using far more greens than other recipes. I have decided flavour is more important than traditional aesthetics for this soup. If you have kids who don’t like green: sorry!

As we’ve discussed, this soup uses leek greens as opposed to leek whites to keep the FODMAP content down. It also uses a bunch of spring onion greens to really ramp (very niche food pun) up the onion flavour.

It is hugely important to thoroughly wash leek greens before use. They collect a lot of dirt, so you really need to break apart each piece individually and give it a good rinse. Nothing worse than biting a piece of dirt, quite frankly.

I will dedicate a whole section to potatoes below, because they are critically important. Time to break out that starchy to waxy potato spectrum knowledge.

Cream and milk help to lighten the colour of the soup to a less green shade of green, and to make it rich and luxurious. For a vegan option, simply omit the cream and use plant based milk.

I used Massell chicken style (vegan and FODMAP friendly) stock cubes for this soup. You can use any sort of stock you like, but make sure it’s FODMAP friendly if it needs to be. I noticed not all the Massell ones are, so check the label. You can also use a FODMAP friendly homemade stock, if you happen to have some on hand.

How much stock and milk should I add to this FODMAP friendly leek and potato soup?

This seems like a bit of a mundane note, but I think it’s worth mentioning. Every batch of soup will be a little different, so I recommend adding less liquid to start, then adding more as necessary. You can always add more, but you can’t subtract.

I like to add my milk and cream after blending, right at the end. That way I can assess the soup and decide if I am happy with the consistency before adding more. Everyone likes a different soup thickness, too, so add to your tastes. Keep in mind that this means having more milk on hand than the recipe specifies. The soup does thicken as it cools, so you can thin it a little more than for your tastes.

As we have mentioned, the cream is optional and the milk used can be any milk that works with your diet.

How to blend potato based soups

If you have ever tried to make mash potato in a blender, you know that potatoes and blenders don’t mix (pardon the pun) nicely. While other soups (like my pumpkin soup or it’s Moroccan flavour inspired counterpart) can be blended any which way, potato is more fussy.

Blending potatoes gelatinises their starches (in fact, this gelling forms the basis of my vegan gnocchi). This will result in a gluey, gloopy soup. I HIGHLY recommend using a stick blender for this reason – you can blend the soup only as much as necessary, without overdoing it.

If you don’t have a stick blender, you can also use a regular blender. You will need to let the soup cool though, otherwise it might explode in the blender. This is particularly important if you are using a NutriBullet, which has no air holes for steam to escape. If you use a NutriBullet, I recommend cooling the soup entirely before you blend.

Which potatoes are best for leek and potato soup?

Different potatoes perform differently in cooking applications. Some are great for roasting, while others are great for potato salad. A quick refresher on the starchy to waxy potato spectrum and what that means for our low FODMAP leek and potato soup. TLDR: we want a starchy variety potato to make soup.

Starchy: Like the classic Idaho or Russet, these potatoes are (obviously) high in starch and low in moisture. They’re fluffy, making them great for boiling, baking and frying, but they don’t hold their shape well, so they should be avoided in dishes like casseroles, gratins and potato salads.

Waxy: Like Red Bliss or New Potatoes, these have a low starch content and are often characterized by a creamy, firm and moist flesh that holds its shape well after cooking. They’re typically great for roasting, boiling, casseroles and potato salads. My favourite here in Australia is Dutch cream.

All-Purpose: These potatoes have a medium starch content that fall somewhere in between the starchy and waxy potatoes. They’re a true multi-purpose potato, and therefore can be used for just about any cooking application. A classic example is the Yukon Gold. My favourite here in Australia is Sebago, because I seem to be able to get them quite easily.

A Starchy/floury or all rounder variety of potato is best for soup. They blend easily and emulsify to create a creamy, luscious end prodct. Waxy potatoes hold their shape after baking or boiling, and that’s not what we want for our soup.

In Australia, the following are considered all rounder potatoes:

And the following are starchy or floury:

Topping suggestions for your low FODMAP leek and potato soup

I mean, you can top this FODMAP-friendly leek and potato soup with nothing, or with whatever you like. Sometimes people ask what the toppings in the photos are, though, so I figured I may as well delve in a little.

For most of these photos, I topped the soup with leftover cream, some truffle oil, glazed haloumi, a piece of garlic ghee infused baguette (baguette recipe here) and some basil.

I shot them just prior to my trip to Thailand, so there’s not much image and therefore topping variety. Needless to say, though, you can top yours with whatever you like and whatever you have on hand. 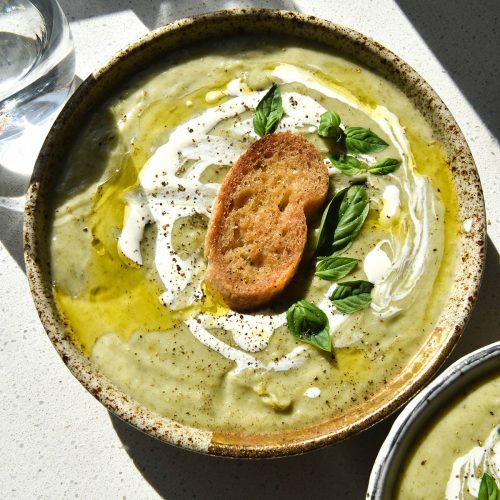 Keyword low fodmap
Tried this recipe?Let us know how it was!