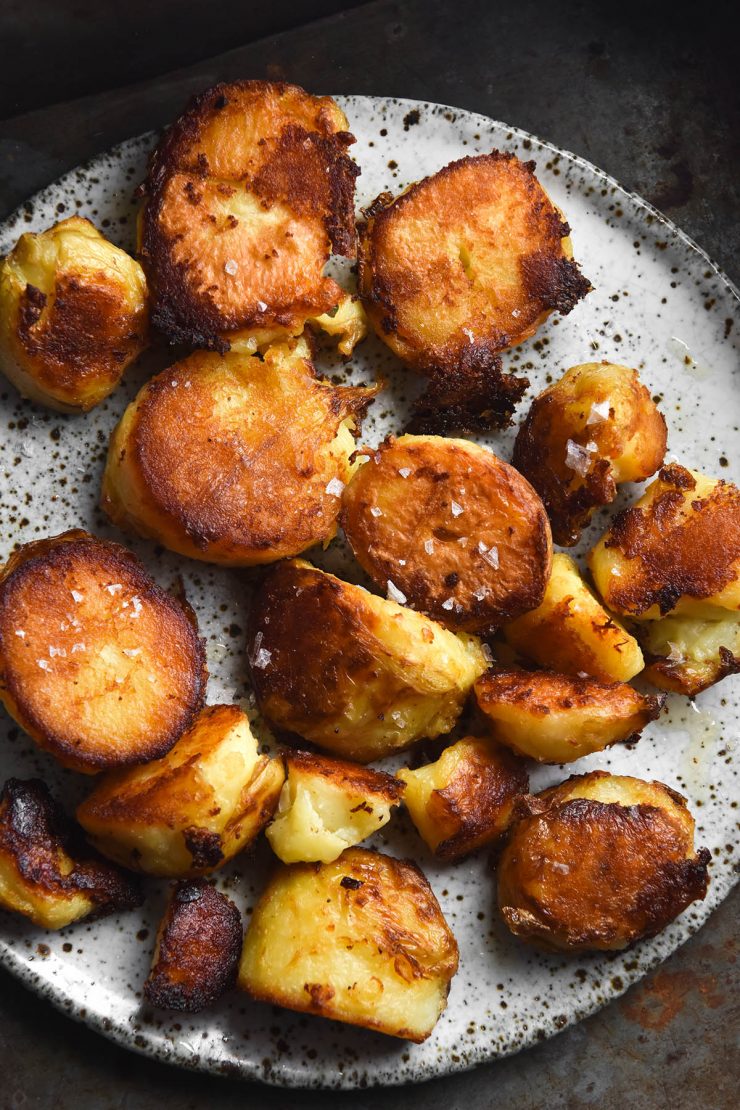 Way back in the day, I developed a vegan roast potatoes recipe specifically for crispy Kipfler potatoes. This was before I fully appreciated the starchy to waxy potato spectrum. I love that recipe and I use the method all the time, but today I wanted to chat all things crispy roast potatoes, including the best varieties for the task.

These potatoes are crispy, crunchy and golden. Potentially my favourite part, though, is that the cold ones don’t get that dry, leathery mouthfeel to them. They are delicious cold as well as hot, which is rare for a roasted potato. They use very ingredients and are naturally vegan and gluten free. These are crunchy, crisp oven roasted potatoes at their best.

These potatoes utilise a few key steps to keep them fluffy on the inside and shatteringly crisp on the outside. Boiling them in baking soda creates a slurry of potato starch around each potato. Which brings us to the next step: giving them a good shake once boiled and steam dried. This shaking will create that starchy crust, which will become crisp once it hits the hot oil we have preheated.

Choosing the potatoes for your vegan roast potatoes

A good variety of potato to choose for crispy roast potatoes is an all rounder. These potatoes are the best of both worlds – they are starchy enough to result in a fluffy potato interior, but waxy enough not to turn to mash after boiling and roasting.

The best and most easily available varieties of all rounder potatoes will vary country to country. In Australia, the Sebago (also called white potatoes at the supermarket) is very commonly sold. It’s not necessarily my number one, but it is easily accessible.

Other all rounder or roast appropriate varieties in Australia are:

After you’ve scrubbed your potatoes, it’s time to boil them. Par boiling the potatoes does a few things. Firstly, it introduces the alkaline ingredient (baking soda) to the potatoes. As per this Serious Eats article, the baking soda breaks down the edges of the potato, which will create a starchy slurry that crisps up like a charm in the oven. Think of crispy tofu – the corn flour creates a crispy, shattering crunch one cooked. Same goes for these potatoes.

To parboil your potatoes, bring a large pot of very well salted water to the boil. The baking soda (very) temporarily fizzes up when you add it, so make sure to leave enough room for that. Once the water is boiling, add that baking soda and the potatoes. Cook them until they are 80% done, and a knife slides through with just a bit of resistance. Gently move them around in the water if some aren’t cooked while some are falling apart. Remove any that are done before the rest.

Step 2: Getting your potatoes ready for the oven

Once your potatoes are done, it’s time to strain them and allow them to steam dry. Steam drying is basically just the potatoes drying off in their own heat – you don’t need to do anything here.

When the potatoes are slightly cooler, slice them into bite sized chunks as you see fit. I like smaller ones for a higher crisp to fluffy innard ratio, but you can cut them how you prefer. I also love crispy potato skins and I do recommend keeping them on here.

The (second) last trick of the day is to add 2 tablespoons (40ml) of vegetable oil and 1/2 teaspoon salt to a large mixing bowl. You will need a plate or a tray to cover the mouth of the bowl completely as you shake the potatoes, so choose accordingly. Adding oil here will coat the tops of the potatoes so they don’t become leathery in the oven.

Add the chopped potatoes to the bowl and pop the ‘lid’ on. Give them a couple of vigorous shakes, then assess. The potatoes should be lightly covered in a mash potato looking starch. This will crisp up in the oven beautifully. You don’t want the potatoes to fall apart, but you do want a decent amount of this mash potato starch coating. Over time you’ll learn how much of if you prefer.

Yes, more oil. The reason we add oil to the potatoes in the bowl is to ensure that the tops of the potatoes don’t become leathery and dry before we turn them. It’s precarious and difficult to baste the tops in the hot oil as you place the potatoes on the tray. Yes, I have tried it. This way, we get all the benefits of the hot oil as well as non-leathery potato tops.

All up, I find you can get away with 6 tablespoons of oil total. This is just under 1/2 an Australian cup. We’re making crispy potatoes, I’m not even going to justify the oil.

On the note of oil, I tend to use vegetable oil here. It has a higher smoke point and is accessible. It’s also (obviously) vegan.

Step 3: Preheating the oven and the oil

Whenever you open an oven with hot oil, be careful of your eyes. Hot oil stings, and if you’re caught off guard it is never fun. Make sure the tray of hot oil has an easy, accessible place to rest before you begin. Then, working quickly, remove the oven tray and gently place the potatoes in the oil. It’s important to give them room and not overcrowd the pan – this will result in less crispy potatoes. It’s also important not to cook anything else in the oven while doing the potatoes. Too much food in the oven will create steam, which is the enemy of crispiness.

Give the bottom of the potatoes a chance to crisp up in the oven before turning them. Baste any dry looking ones with oil from the tray, and continue baking until all sides are golden.

TLDR: The how and why of crispy roast potatoes 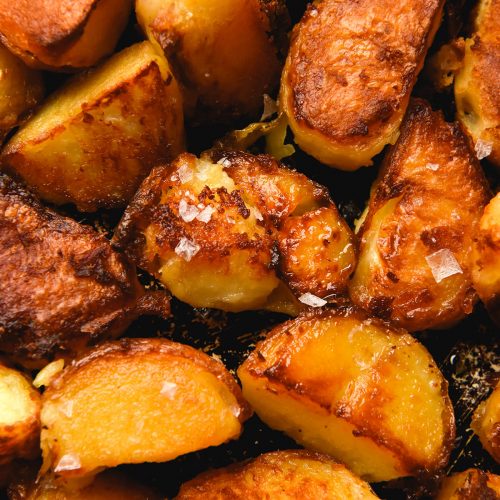