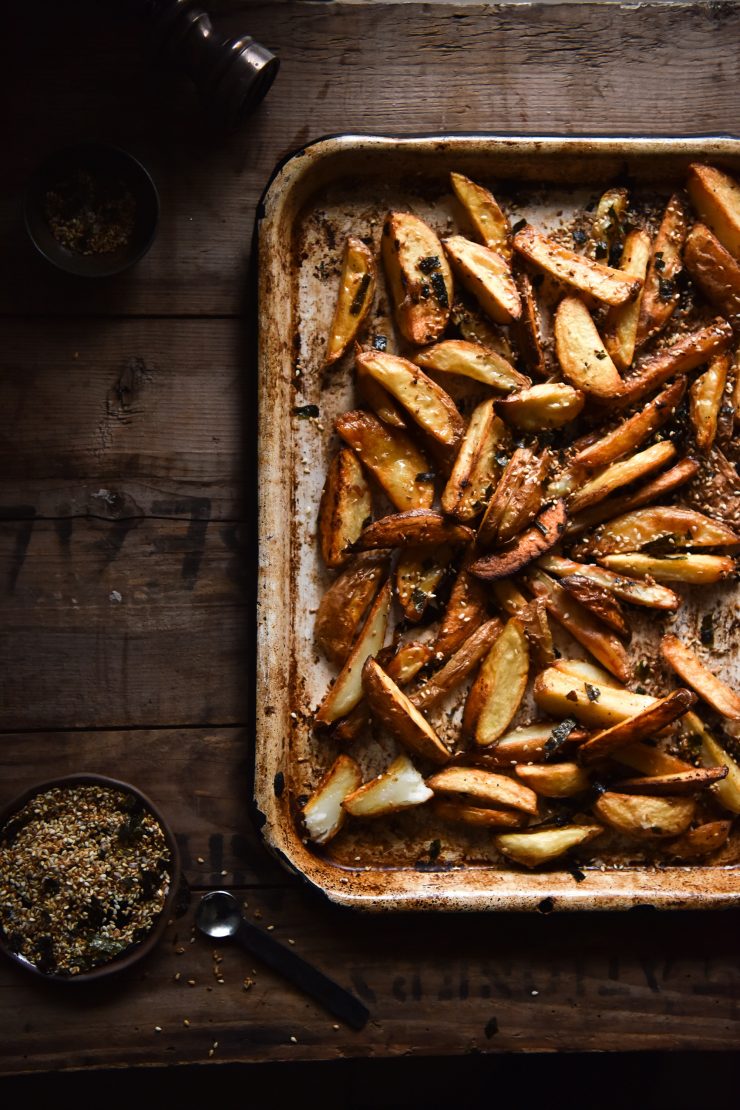 Dramatic statement. Important cause. How to make the crispiest oven chips of my life has been a question that has plagued me for years, and it ends now. I’ve researched this topic for a number of years, on and off. Every time I make a mediocre batch of oven chips, I vow to myself that I will make a change. And now, I am.

You can choose to deploy all these tips, or a few, or none. How you deal with this information is up to you. It has important for me to round it all up into one place, however. Too often I read blog posts headings that promise me crispy oven chips, only to omit crucial ‘whys’ and ‘hows’ of the chip process. Why would I soak them? How tangible is the difference? Which potatoes should I buy? What is the best way to cut them for maximum crispiness? These are questions we will answer today. And by me, I mean you and I, because we’re all united in a common quest: how to make the crispiest oven chips you’ve ever encountered.

HOW TO MAKE THE CRISPIEST OVEN CHIPS: CHOOSING YOUR POTATOES

Let’s talk potato varieties. Australian supermarket offerings seem to suggest that only white, pink and unbrushed varieties exist. This is not so. There are a multitude of potato varieties (although not as many as in Peru, depressingly) and they all have different applications in which they shine the most. Today we’ll be focusing the best varieties for chips only. Starchy and thus floury potatoes are supposedly ideal for chips, but here’s a quick rundown of the options:

Starchy: Like the classic Idaho or Russet, these potatoes are (obviously) high in starch and low in moisture. They’re fluffy, making them great for boiling, baking and frying, but they don’t hold their shape well, so they should be avoided in dishes like casseroles, gratins and potato salads.

Waxy: Like Red Bliss or New Potatoes, these have a low starch content and are often characterized by a creamy, firm and moist flesh that holds its shape well after cooking. They’re typically great for roasting, boiling, casseroles and potato salads. My favourite here in Australia is Dutch cream.

All-Purpose: These potatoes have a medium starch content that fall somewhere in between the starchy and waxy potatoes. They’re a true multi-purpose potato, and therefore can be used for just about any cooking application. A classic example is the Yukon Gold. My favourite here in Australia is Sebago, because I seem to be able to get them quite easily.

HOW TO MAKE THE CRISPIEST OVEN CHIPS: POST POTATO

Our next steps involve choosing how we will prepare our potatoes. There are many options: you can soak your chips beforehand, you can par boil the potatoes prior to slicing into chips, or you can throw them straight in the oven. I have tested all these methods alongside each other, and photographed them for your convenience.

The idea behind soaking chips, as with rice, is that it removes the excess starch prior to cooking. This is said to be produce a crunchier chip surface that is less likely to stick to the pan. There is also research that suggests that a potentially carcinogenic chemical forms when high starch foods are cooked at high temperatures. Soaking for 2+ hours reduces the formation of that chemical. Apparently. Here is a link if you want to know more. I’m just here for the crispy chips.

My research has indicated that you can soak your oven chips in a salty solution, although I’m unsure if they would absorb the same amount of salt as the boiled variety.

This works in a similar way to soaking the chips, as some of the starch is removed. I am unsure of the effect par boiling has on the aforementioned chemical formation. However, I do know that it has the added bonus of salting the interior of the potato, which goes a long way in achieving deeply flavoursome oven chips. It also cuts down the amount of time needed to cook chips in the oven. This website suggests placing the potatoes in the water only after it is boiling – apparently this helps give the chips structure. Par boiling is by far my favourite method of cooking oven chips.

My favourite new cookbook, Salt Fat Acid Heat, suggests that water for boiling should taste like the ocean, for optimal salt factor. For a medium sized pot, a tablespoon of salt achieved this salinity for me, although it will depend on the size of the pot and volume of water.

My preference for the boil is to completely cook the potato through. This allows for easier chip shaping, as well as reduced cooking time in the oven. It also seems to make the interior of the chip super fluffy, as compared to roasting raw potato.

STRAIGHT INTO THE OVEN:

The most time efficient method, but not at all my favourite. It does nothing to reduce the starch or add any flavour. I find it produces those hollow, empty chips that feel as though the potato has just evaporated and left a shell. Boiling the potatoes takes an extra 15-20 minutes, but cuts down the amount of compulsory oven time. Straight in the oven is a no from me.

We have a plethora of choices when it comes to the oil and salt used for chips. Let us dissect them for the nerdy love of excellent chips.

Personally, I find peanut has quite a strong taste – one that I enjoy, but reserve for Asian style cooking. My preference out of the high smoke point oils is vegetable, but I also olive regularly because it’s what I have on hand, and I don’t hate it.

How to prepare the oil? Once the potatoes are boiled and dried or soaked and dried, heat the oil in a 180 degree oven for around 10-15 minutes. It needs to sizzle on contact with the potato, creating a crispy, solid potato edge, and assisting in non-sticking. If the oil doesn’t sizzle when you add a chip, stop and wait until it does.

I cannot recommend anything other than fine salt (but not table) or sea salt flakes. HOWEVER, I kind of can, because I would recommend crushing the sea salt flakes into a fine powder. You can do this with a mortar and pestle. This allows the salt to properly cling to the chips, without leaving all your precious sea salt on the oven tray. Table salt has a number of additives to allow it to pour smoothly. My favourite aforementioned cookbook says it is no bueno, and that’s good enough for me.

When to salt? I suggest salting the soaking water or the boiling water, and then leaving salt out of the equation until the chips are cooked. As mentioned, fine salt clings to chips better, so I’d recommend crushing up your sea salt flakes, or using a kosher salt. There are internet suggestions that salting beforehand draws the moisture out of the potato and results in a dry, hollow chip.

An important DO NOT DO THIS. I know it’s super impractical and annoying, particularly when you are cooking for more than one. Or just because you can eat a lot of chips. However, overcrowding the oven tray, or the oven, or both, will steam up the oven. Steam is the worst enemy of crispy oven chips – they stand no chance if the tray is jammed and there are two trays in the oven.

Further than that, overcrowding reduces the temperature of the oil that the chips are a bathin’ in, giving them even less chance to crisp up. Heat is key to crispy chips.

Opinions vary on how high to have your oven temperature. Some suggest that you should cook your oven chips at a high heat consistently. Other suggest you should cook it on a regular heat, and then crank the heat for the final 15 or so minutes. Higher temperatures ensure that the chips don’t stick to the pan, which is useful. They also result in you getting to eat chips faster, which is nice.

I like to cook my chips at a consistent temperature of 200 degrees. Using vegetable oil is helpful in this instance – you can heat it to a higher temperature.

This depends on the size of your chips, but as a general rule, I’d suggest 20 minutes on one side, and then an additional 15-20 on the other side.

Yes, I put my name in the heading as a caveat in case someone suggests a flaw in my method. This is MY favourite way to cook chips, based on research and my own extensive chip experiments.

The only potatoes I have access to are the ones at the supermarket. Any tips?

Go for a floury variety as opposed to a waxy variety, and try to get an unbrushed sort if you can. The white potatoes at the supermarket are generally Nadine (unless marked otherwise) which are an all rounder. The potatoes with red skin are Desireee. I have found my experience with roasting potatoes that both of these varieties scuff up well after being boiled, meaning they have a crispy crunchy surface after roasting.

Should I cut the potatoes into chip form before boiling them, or boil them whole?

The jury seems to be out on this one. I tend to par boil the potatoes whole, but Heston’s supposedly magical thrice cooked (but deep fried) chip recipe simmers the cut potatoes for around half an hour, before freezing them to rid them of excess moisture.

People suggest that cutting the potatoes before boiling them can waterlog them, resulting in soggy chips. They also suggest that the potatoes lose their nutrients and flavour. I might also add that they’ll absorb extra salt from the boiling water than they would if they were whole.

I haven’t tested this theory (I’ll update this post when I do) but I think your best bet would be to boil the chips in salty water, and then cook them on a hot oven tray with baking paper, and maybe a bit of spray oil.

They’re cheaper, they last longer, you know what they’ve been washed in (ie just water) and I think we live in a overly sanitary world and a little dirt is good for the soul and the digestive system. Don’t fact check me on that last one, but fact check me on all the others.

Ask me and I’ll google it and then reply like I’m a potato expert.