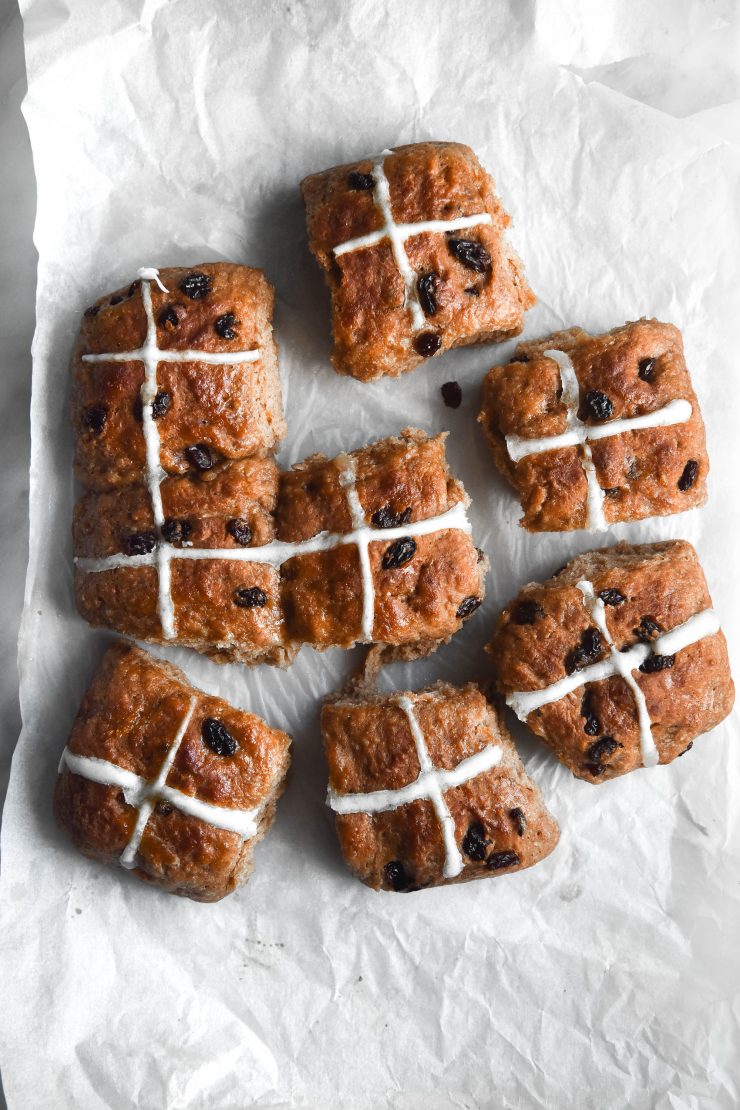 I always start working on seasonal recipes a little too late. My ANZAC style cookies? A day or two before ANZAC day. My sourdough hot cross buns? A week AFTER Easter. This year I’m working around my chaotic self by getting it done a month in advance. And by it, I mean these vegan gluten-free hot cross buns.

An interesting note: the fuller, fluffier hot cross bun photos were made with 2 cups (500ml) milk. The smaller, more compact ones were made with 1 3/4 cups milk. To an extent, high hydration means a fluffier, puffier HCB. It should be said, though: it was slightly colder the day I made the smaller buns, and yeast needs heat to rise).

These hot cross buns are (obviously!) egg and dairy free, given that they are vegan. They are also nut free, xanthan gum free and fructose friendly.

A note on psyllium husk powder

I have spent years eating chocolate or fruit peel based hot cross buns. My primary reasoning for this is that I generally end up eating more than one bun per sitting, which means I’m overdoing the raisins.

That all said, I have made a batch of these vegan, gluten-free with raisins and I loved the flavour. It was nostalgic and a real treat. Raisins are currently considered FODMAP friendly in 13g (or 1 tablespoon) servings per person. This recipe can contain up to 75g raisins and you can eat 1 1/2 buns in one go. Needless to say, if raisins aren’t an issue for you, you can use however many you like.

If you’d prefer not to go into dried fruit territory, you can use mixed peel or chocolate chips. You can also use my FODMAP friendly ‘fruit mince’ recipe, which was based on the fruitless Christmas pudding I love so much.

I’ve tested a bunch of different proofing options for these buns and they all work really nicely. Choose what works best for you. Whichever you choose, make sure you don’t pipe the crosses on until just before baking.

One last important note on hydration

We’ve discussed that different brands of rice flour, or rice flour in different countries, have varying degrees of thirstiness. What I think it is important to point out, though, is that in order to get fluffy buns, it is necessary to use the most amount of liquid you can. I found that buns with less liquid tended to be a little gluey, whereas buns with more liquid were fluffier. My thought is that the yeast likes more liquid, but I haven’t confirmed this.

So, I’d really recommend going with the full 500ml (2 cups) of milk. If your dough is harder to shape, simply pop it in the fridge (up to overnight) before trying again. This will also minimise the chance of super spready buns. Super spready buns are better than gluey ones, if you ask me. 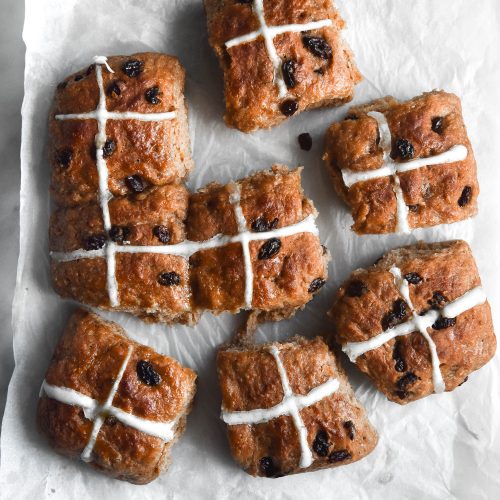 For the crosses (optional):

To make the dough:

To make the crosses:

Initially, I specified that you could use 1 1/2 cups (375ml) or up to 2 cups. As I make these buns more, though, I recommend using the full two cups. I found that buns with less liquid were (interestingly) more gluey than buns with more liquid.
Tried this recipe?Let us know how it was!