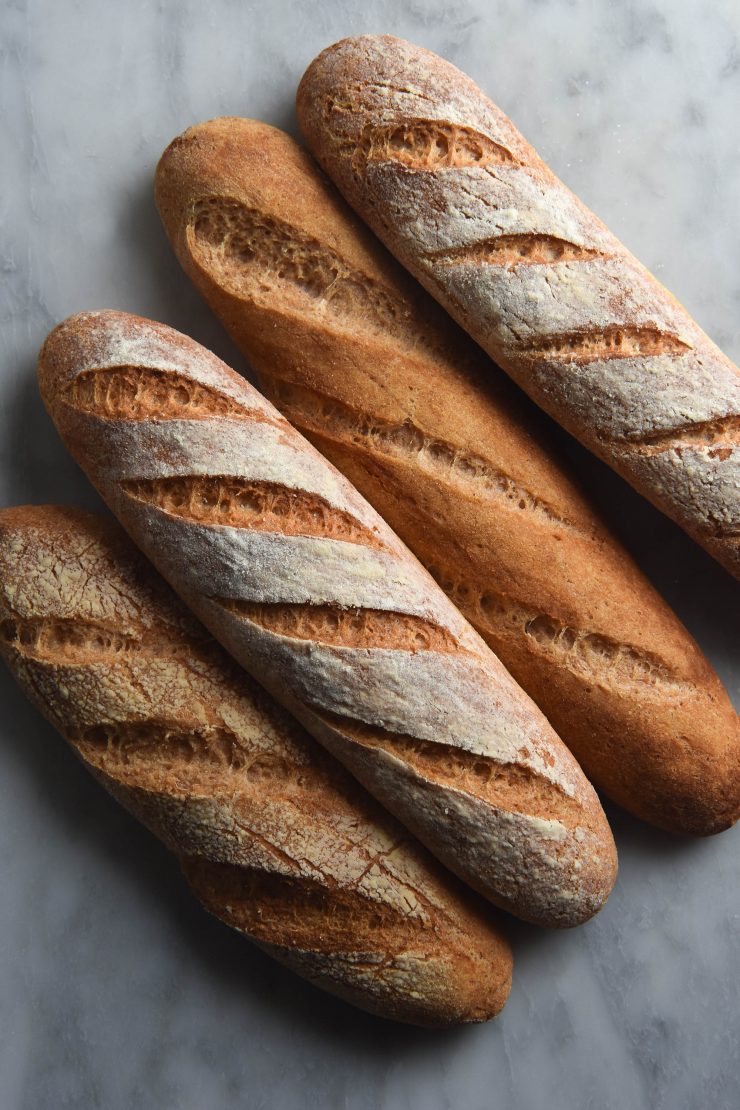 The recipe for these gluten free baguettes was originally part of the bonus e-book for my new cookbook, Intolerance Friendly Kitchen. Now that the book is out, though, I wanted to share it with everyone. It’s an incredibly easy and delicious recipe, if I do say so myself.

These gluten free baguettes are FODMAP friendly, xanthan gum free, nut free, and use only two flours. They’re not overrun by starch, but they do contain tapioca flour for that stretch and light, white fluffiness. They are also enriched with an egg and butter, but we’ll go into vegan options below.

The baguettes are made without xanthan gum. They use psyllium husk for binding and elasticity. A very simple blend of white rice flour and tapioca flour is used to create a soft and light gluten free bread without the need for gums.

Tips and tricks for your gluten free baguettes

First and foremost: yes, this recipe really does need an overnight (or 6+ hour) rest in the fridge. I tried to make it without and the result was lacklustre and flat. The resting time slowly ferments the dough to develop flavour, but it also gives it time to absorb liquid. A firmer dough = a batard with better shape.

Which brings me to the lack of a second rise in this recipe. I experimented with forming the batards and then leaving them to rise for another 30 minutes before baking, but found that the baguettes tended to spread during this time, leaving them a little flat. For a lovely perky baguette, it’s best to shape them and get them straight into the oven.

You will need a lame (bread scoring utensil) or a sharp knife and a baguette pan or two long pieces of baking paper for this recipe.

Putting the baguettes straight into the oven from the fridge will help them retain their shape. This is particularly important if you don’t have a bread pan, because they tend to spread outwards if they are left for a second proof on the bench. A second proof is more suited to a baguette pan, where they will still be given support in the oven.

I have a baguette pan and I really love it. They are definitely optional, but it does give the baguette a lovely shape and that classic pattern on the bottom of the baguette.

First and foremost, I haven’t yet tested these batards in vegan form. However, given the recipe I assume it is quite straightforward to do. Simply use a vegan butter substitute in place of the vegan butter. To replace the egg, add 5g extra psyllium husk and 50g extra water. Proceed with the recipe as written.

Make sure that you also brush your batards or baguettes with vegan butter. It tends not to brown as well as regular butter, so I recommend cranking the oven before putting the baguettes in. Alternatively, you can brush the baguettes with a plant based milk mixed with a little maple syrup or agave to aid with browning in the oven. 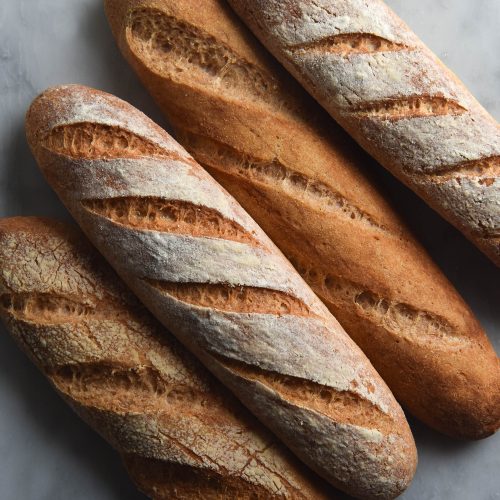 Because these are a higher starch style of baguette, the dough can’t be left in the fridge for too long or it will develop an overly yeasty taste. If you can’t bake them first thing in the morning, I recommend mixing the dough in the morning and baking them in the afternoon/evening. They are still delicious with the yeasty aftertaste, but it isn’t a subtle baguette flavour.
Keyword xanthan gum free
Tried this recipe?Let us know how it was!