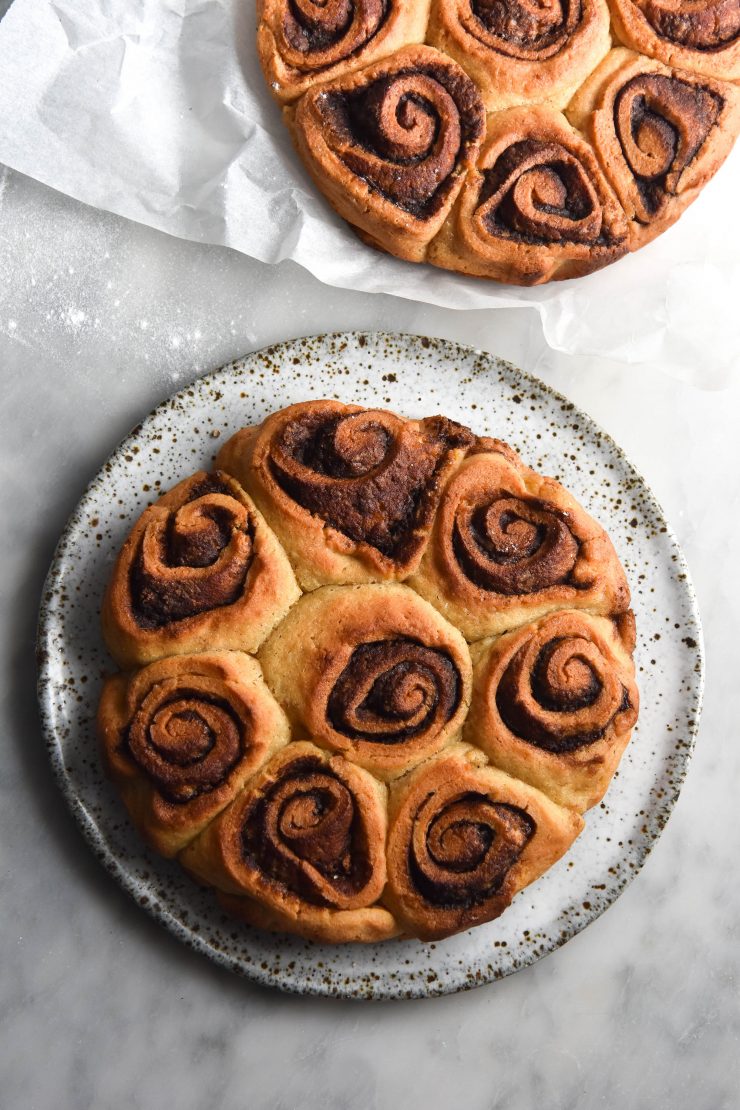 To me, there are three pinnacles of gluten free dessert making: puff pastry, croissants and cinnamon rolls. It has taken me nearly a decade of learning, but today I’m proud to say I’ve cracked the case for gluten free cinnamon rolls (and the first two recipes are in my cookbook).

These gluten free cinnamon rolls are FODMAP friendly, free of added nuts, low lactose and made without xanthan gum. While I try not to use too many starches or any gums in my recipes, a light and fluffy cinnamon roll really does need some starch for fluff and chew.

Firstly, it’s worth mentioning that I strongly advise sticking to the recipe as written. It has taken me a long time to develop the recipe as it stands, so it’s worth keeping everything as is for best results.

Notes on the gluten free flours

The flours in this recipe have been purposefully chosen for their qualities. Fine white rice flour is a bland, white flour that works well as a wheat alternative. The caveat? It needs to be fresh. The stuff you buy from the supermarket is often gritty and randid. It often smells musty and almost floral – a taste which will permeate your baked good. For best results, try and buy from a bulk food store, as the quality is better and the flour is fresher.

The second flour in these scrolls is a starch. In my experience, starch is necessary for creating a light and fluffy cinnamon scroll with the right amount of chew and stretch. I have used half sorghum flour and half buckwheat flour as a starch free option, but I found them to be less delicious without a bit of chew.

I really like using glutinous rice flour in these scrolls. It adds chew and stretch. Sometimes also called sweet rice flour, it’s easily available at the supermarket in Australia under Erawhan brand.

That said, I have also tested the recipe with tapioca flour and it works well. Tapioca flour tends to absorb less liquid than glutinous rice flour, so make sure you use the lesser amount of milk if you go the tapioca flour route.

Finally, how much milk you add depends on the time you’re taking to make the dough, as well as the type of scroll you want to achieve. If you plan to make the scrolls from start to finish straight away, use a more conservative amount of milk. Highly hydrated dough needs to sit in the fridge overnight to ferment and firm up, whereas less hydrated dough can be rolled out straight away.

Why all this hydration talk? Put simply, a highly hydrated dough creates a super light and fluffy bun. This dough can take up to 2 cups (500ml) of milk if you leave it to ferment in the fridge overnight. It creates a super light and fluffy, white bread style cinnamon scroll. This does come at the expense of structure, however. Highly hydrated buns will lose their shape a little during baking, and often form one large slab of cinnamon scroll. This doesn’t affect the taste, merely the aesthetics. You can choose which route to go down based on your own preferences.

In the mood for festive baking? Try: 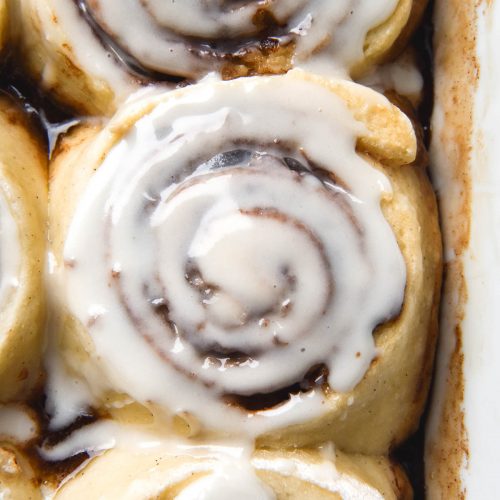 For the cream cheese icing:

To make the binder:

To make the dough:

To make the cinnamon scrolls:

To make the icing:

Adding more milk creates a fluffier scroll, but it also means they are more prone to spreading and the dough will be harder to work with. Make sure you tuck in scrolls with a high hydration – if your tray is too big, place something heat resistant in the corner of the tray to tuck them in. I use two mini loaf pans.  Tapioca flour absorbs less liquid than glutinous rice flour. If you’re using tapioca flour, try to cap the liquid at 1 1/4 cups (310ml) milk maximum.
Tried this recipe?Let us know how it was!