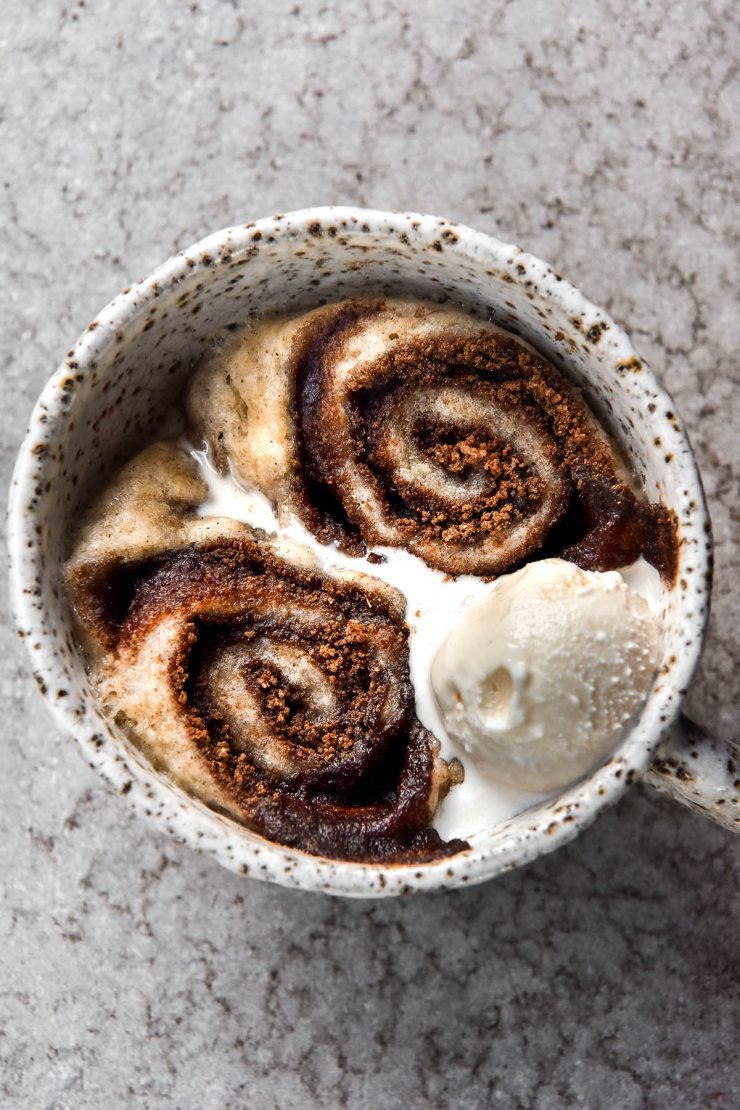 This scroll contains no added nuts (check your milk and vegan butter though). It is also yeast free, egg free, vegan, gum free and has a starch free option. Ready in under 10 minutes, this gluten-free vegan microwave cinnamon scroll is a surefire way to cure your cravings when you have dietary requirements.

If you always read my posts (A: you deserve a medal) but B: you’ll know that I always talk about flour variations. Different flours (brand to brand, country to country) absorb liquid differently, which is why you can follow a recipe and still end up with a dry result.

Added to this is the variation that different brands and styles of vegan milk and butter can bring.

If you have a high risk tolerance, you can add up to a 1/3 cup (80ml) of milk to this gluten-free vegan microwave cinnamon scroll (when you use the wholegrain option).  It might be slightly more difficult to roll, but it will lead to a lovely moist scroll, which is better than a dry one.

If you use the tapioca flour option, I recommend capping the hydration at 1/4 cup (60ml). Of course, this might be different for your flour, but I found adding too much liquid to tapioca made for a gummy scroll.

Another thing to note is that you can still bake dough that ends up too wet to roll. Pinch pieces off with your fingers and put them into the microwave or oven safe vessel. Intersperse the balls of dough with cinnamon sugar as you go (think of it like monkey bread). You might need to cook the batter for longer (perhaps 2 minutes) but it will still be delicious.

On the contrary, if your dough feels dry (this would be quite exceptional as it is a wet dough) add extra milk to the dough before sprinkling on the cinnamon sugar. This will help provide some extra moisture.

How to make this gluten-free microwave cinnamon scroll in the oven:

Fear not! This gluten-free vegan microwave cinnamon scroll doesn’t need to be made in a microwave. It can also be made in the oven. Although it takes a little bit longer, it is still a far quicker process than making a traditional scroll. Quick and easy steps below:

To make a pumpkin cinnamon scroll:

A bonus recipe! To make a festive pumpkin cinnamon scroll, proceed as follows: 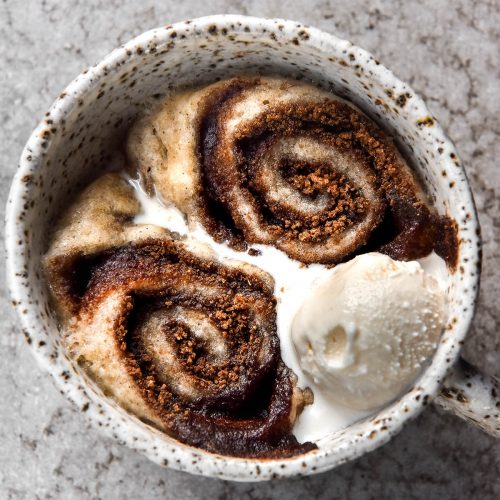 For the glaze: (optional)

For best results, read the notes in the body of the post before you start
Tried this recipe?Let us know how it was!