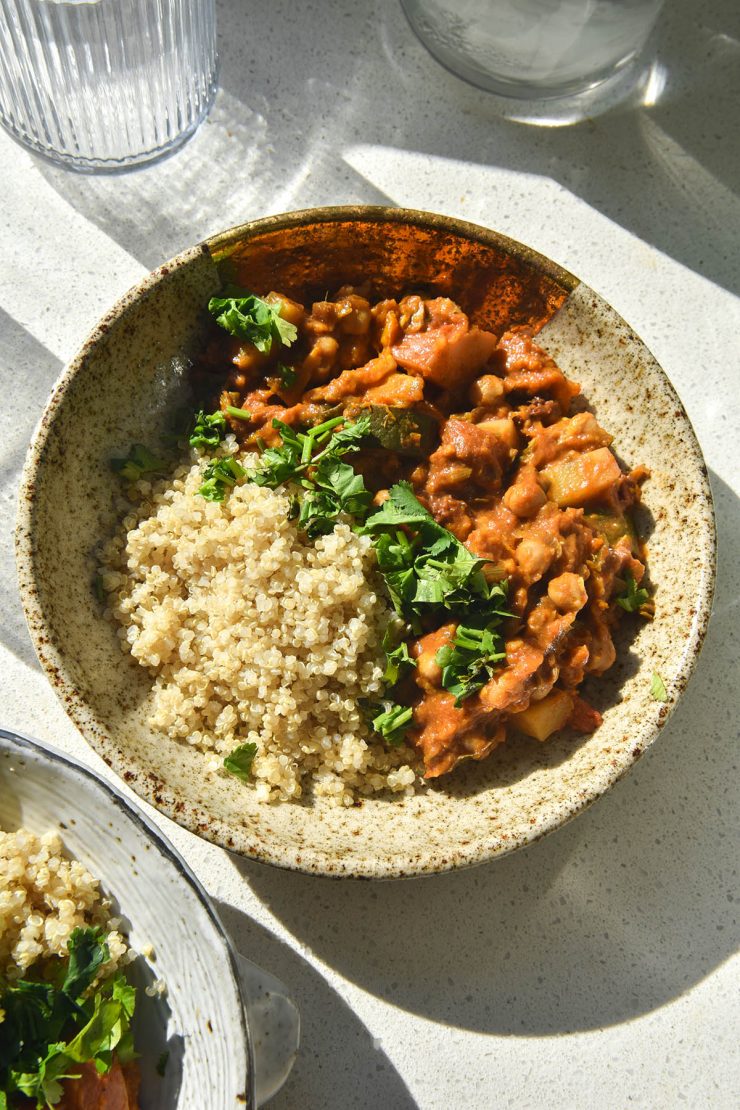 Before we begin, a bit of housekeeping: this FODMAP friendly vegetable tagine is best considered tagine style. To keep it within acceptable FODMAP limits, I have had to change up some of the ingredients. As such, it is in no means a traditional vegetable tagine.

Tagine is a North African dish akin to a stew, often made with meat and vegetables. It also refers to the cooking vessel using for making tagine – a flat earthernware cooking dish with a conical lid. I have made this FODMAP friendly vegetable tagine in a pot since I don’t have a tagine.

As always, my recipe differing from tradition is never with the intention of making a dish ‘better’. It is to ensure people with dietary restrictions can enjoy a vegetable tagine as well.

This vegetable tagine is grain free and vegan, as well as being low FODMAP. It is made without onion and garlic, so it is suitable for people who avoid these ingredients. It is well spiced and bold in flavour. The Moroccan inspired dish is served with rice or quinoa to keep it gluten free, although it is traditionally served with couscous.

A note on the spices

I know that the list of spices looks long and intimidating, but they all add a little something, I promise! That said, if you’re looking for something to cull, I’d suggest the coriander powder and the fennel seeds. I understand not everybody has the budget to jam pack the spice cabinet.

To omit the coriander powder, I’d suggest adding 1/2 tablespoon extra cumin and cardamom powder. On the note of that, cardamom powder in Australia is not particularly strong or pungent. This is why the recipe calls for 1 tablespoon. If you’ve made your own from pods or have access to incredibly fresh spices, add it to taste. I have not tried using cardamom pods here, but add them to taste.

A note on preserved lemon

Preserved lemon is really the star of this dish. It adds zing, flavour and complexity, and I really don’t recommend omitting it. You can buy preserved lemon from specialty grocers in Australia. You can often buy it at the supermarket too. It’s rare that recipes call for as much preserved lemon as this tagine does, so it generally lasts for ages.

If you happen to be flush for lemons, you can easily make your own preserved lemons. They take a while (about a month) to do their thing, but the process is very simple. All you need is lemons and salt!

What to serve with your FODMAP friendly vegetable tagine

This isn’t one of those annoying, unhelpful space fillers, I promise. If you need this dish to be gluten free, you cannot use the traditional cous cous. Cous cous is made from durum wheat, and is therefore not gluten free. However! There are always options, hence this section.

Arguably the easiest substitutes are rice and quinoa. Although it is quite different to cous cous, it still works really nicely here. You can flavour it, but I quite like leaving it plain. The tagine has a delightfully strong flavour, so it’s nice to have a basic grain to go with it.

I also recommend serving your FODMAP friendly vegetable tagine with some yoghurt. This is particularly important if you’ve added heat, as it’s a nice cooling ingredient.

Finally, the coriander leaves that you’ve got leftover from using the roots. It adds some freshness and a bit of colour. The roots also add a lot of flavour to the base of the tagine. 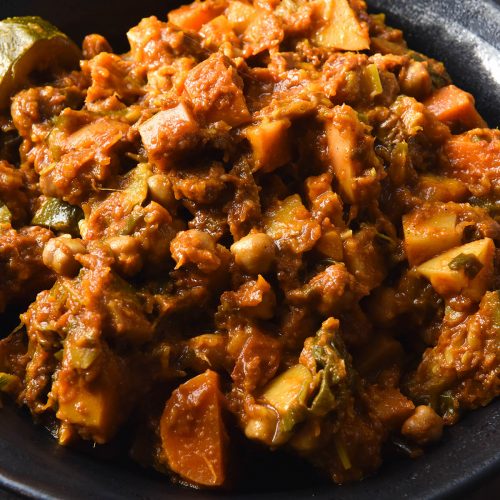 For the spice mix:

Ensure all the vegetables (in particular, the potatoes) are chopped into SMALL bite sized pieces that are roughly even in size. If you have big random chunks of potato, you might be in for a raw potato surprise.
Keyword FODMAP friendly, fodmap friendly vegetable tagine, tagine without onion and garlic, vegetable tagine, Vegetarian, without onion and garlic
Tried this recipe?Let us know how it was!