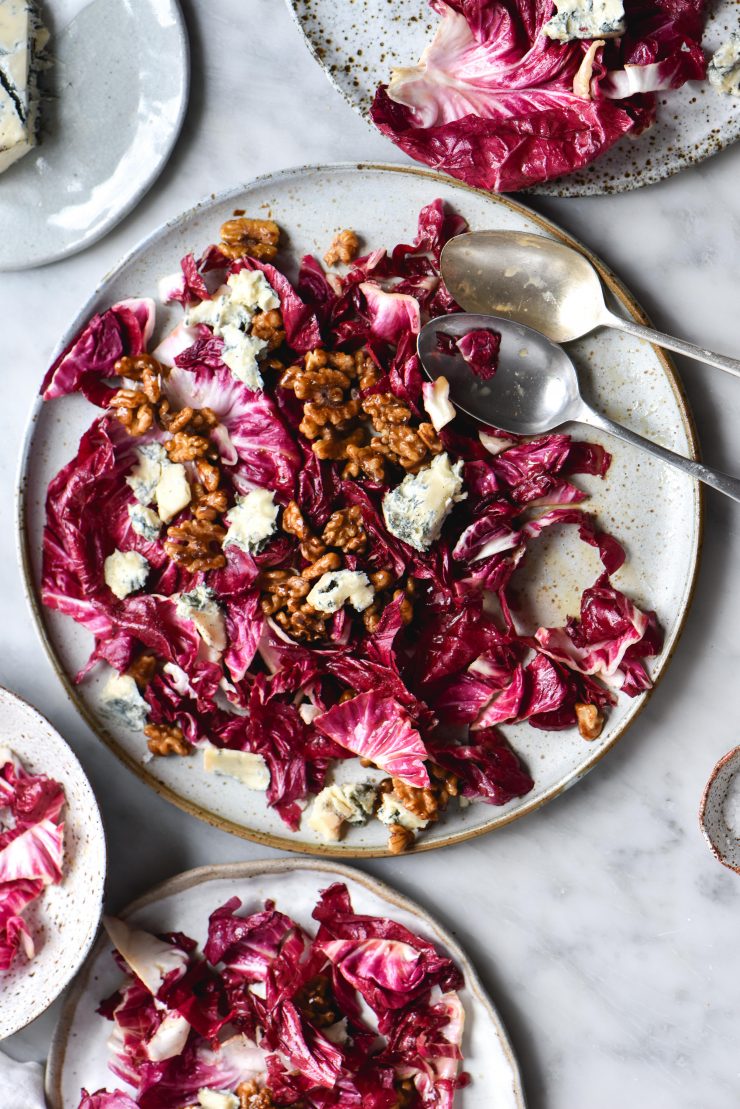 It has taken me 31 years to realise that simple really is best. I’ve neglected developing salad recipes for years, too enticed by the challenge of the baked good or the intricate lasagne. This year that changes, and the change starts with this radicchio salad. The salad is studded with hunks of blue cheese and honey cinnamon walnuts. It’s at home on a winter table as it is at a BBQ. The best part? It takes all of 10 minutes to pull together.

The radicchio salad is FODMAP friendly, gluten and grain free. It also happens to be SIBO bi-phasic stage 2 friendly and it is easily adapted to be vegan.  Although I haven’t tried it, I daresay you could substitute the walnuts for pumpkin seeds for a nut free option, too.  You might need to add a little less honey because they have a less intricate surface area than walnuts.

One last radicchio salad sell: it’s ready in 10 (as I’ve said) and all the ingredients have a good fridge life. You can buy them in advance (radicchio lasts about 1-2 weeks in the fridge) and throw them together just before your pals arrive (or after they arrive, for that matter.) TOO EASY.

Firstly, I know that radicchio can be a polarising ingredient, so you can use other lettuce greens if you would prefer. I love the bitterness in combination with the creamy blue cheese, but not everyone does. On that note, you could use a different cheese, if you’re a blue hater. I’d suggest a nice sharp cheese like a pecorino

Secondly, dressing is critical! I have used an easy, 1 minute jar vinaigrette made with olive oil, honey, red wine vinegar, dijon mustard and seasoning. It takes ONE MINUTE and you can use what you have on hand – sherry or balsamic for the vinegar, maple for the honey. This vinaigrette has absolutely changed my salad game. Something that also took me 29 years to discover.

Another aspect of the salad that barely takes any time? The honey and cinnamon walnuts. Simply combine the oil, honey and cinnamon in a saucepan over a medium heat and add the walnuts. Move them around in the pan for a minute or two until nicely coated. Decant them onto a lined baking tray to cool and harden, and sprinkle them with sea salt flakes while they’re warm. Voila! The most delicious, simple addition to a simple and delicious salad.

Substitution notes for your radicchio salad

We’ve covered a lot of them, but I figured it would be helpful to house them all in one place.

FODMAP notes for your radicchio salad

You would need to eat 5 cups of radicchio in a single serve to ingest a moderate amount of oligos. So on the radicchio front, we’re all good. Make sure you check the FODMAP content of other greens, if you’re subbing radicchio out. That said, salad greens are rarely an issue.

There are two tablespoons of honey total in this recipe. Half a tablespoon contains a moderate amount of fructose, so if you’re particularly fructose intolerant I would suggest using maple syrup in one or both of the honey applications. I used honey because I’m currently on the SIBO elimination diet and it’s the only sweetener I’m allowed to have. Plus, I don’t seem to have an issue with it. If you do, adjust accordingly. Make sure you use a pure maple syrup (not a maple flavoured syrup) if you swap.

Walnuts are friendly in serves of 30g per serve, and moderate in fructans at 135g per serve.

Blue cheese has an almost negligible lactose content and is absolutely FODMAP friendly, contrary to popular belief about cheese. If you have a dairy allergy, use a plant based alternative.

Adding the optional pumpkin and chickpeas

To add the cinnamon roasted pumpkin, you will need 500g of Japanese or Kent pumpkin. These have an unlimited FODMAP quantity, whereas butternut does not. You will also need some oil, salt, cinnamon and 15 minutes of your time. The recipe for the pumpkin is in the recipe card of this recipe for quinoa, kale and pumpkin salad. Realistically, though, you could just make it up because it is very simple.

To add the smoky chickpeas, you will need 1 X 400g can of chickpeas, thoroughly rinsed and drained. Canned legumes leech out some of their FODMAPs into the canning water, which is why I recommend them for digestively challenged people. one 400g can becomes about 240-250g of chickpeas once drained. The recipe for the chickpeas is in the recipe card of this recipe for kale and chickpea salad. They take 20 minutes to make. 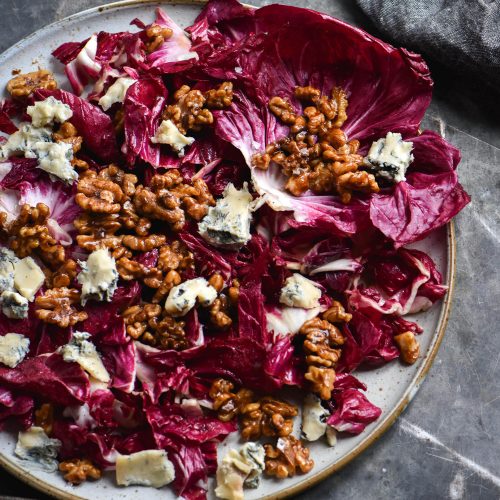 For the honey cinnamon walnuts

For the optional extras:

To make the vinaigrette:

To make the honey cinnamon walnuts:

To finish the salad: