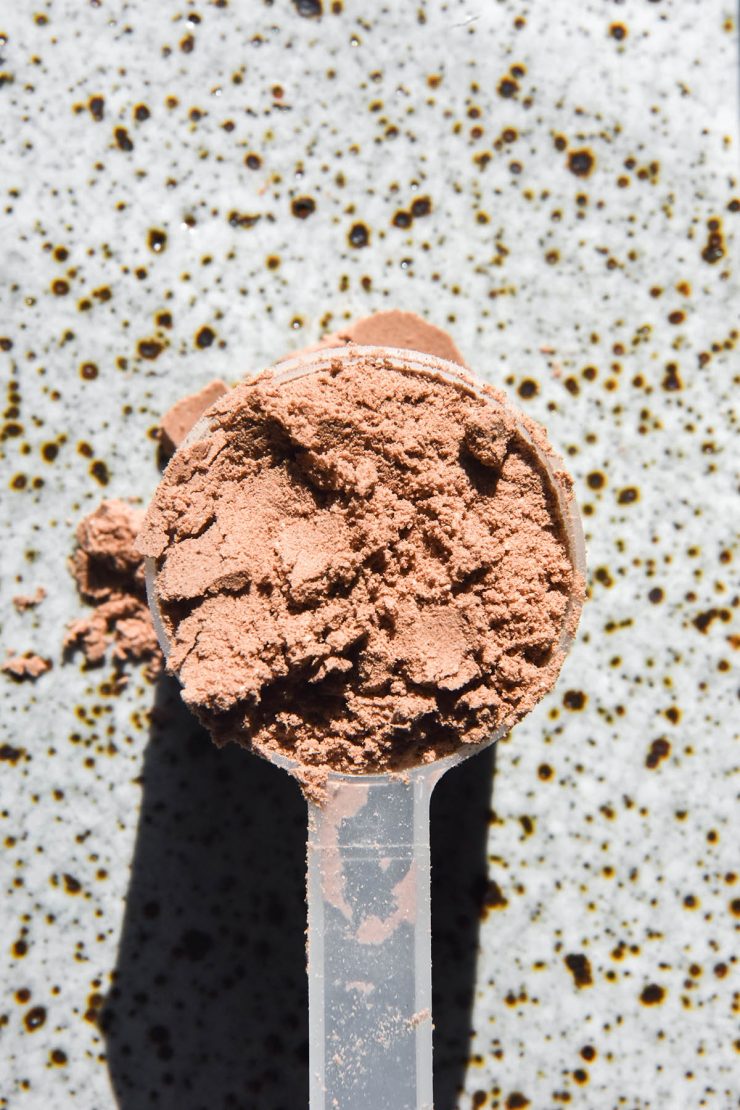 I did the elemental diet in 2020 after years of battling SIBO. I had completed a number of courses of different antibiotics, all to no avail. When the FODMAP diet wasn’t even giving me any relief, I knew I had to go nuclear.

An important note, before we begin: I am not a doctor or a medical professional. This is purely my experience on the diet. I found it really helpful reading about other people’s experiences before I started the diet, so I wanted to provide the whole picture of how it went for me. This is not intended to diagnose or cure or suggest. Please contact a specialist if you think you have SIBO or gastroparesis.

The elemental diet is often considered the last resort treatment. This is because it is exceptionally tough to drink only liquid nutrition for 1-3 weeks. It is, however, very good at treating SIBO, provided it can be adhered to.

The diet needs to be prescribed by a doctor, and comes in various brands and flavours. The doctor will determine how much you need to buy based on your weight and how many calories you’ll need per day. I was prescribed Elementall Chocolate flavour. These days, they also have a pink lemonade flavour, and it would have been incredible to have two flavours to alternate between for variety.

My journey to the elemental diet

I was diagnosed with gastroparesis about 5 or 6 years ago after what my doctor and I assume was a random virus. My digestion has been problematic since a young age, but I became distinctly unwell one weekend before my gastoparesis diagnosis.

For those who don’t know, gastroparesis is a condition where the cleansing waves of your intestines that push food through no longer function as they should. I’m lucky to have a mild enough case – some people end up vomiting up undigested food on a regular basis.

For me personally, my gastroparesis affects my day to day functioning, but not to that extent. My primary symptom is pain/discomfort (almost like a stitch or being punched) in my right side, all day. Depending on what I’ve eaten, how I’ve slept or if I’m hydrated enough (among other things) it can be debilitating and have me in bed.

Gastroparesis and SIBO basically go hand in hand, so it wasn’t long before I was diagnosed with SIBO, too. When you have slow digestion, food spends more time in your intestines and has more time to ferment.

I have to admit, I had two margaritas the night before I started the elemental diet. Given they were off the menu for 13+ weeks (and given we were in lockdown) it seemed only fair. As a result, though, I was tired, had a headache and mostly stayed in bed. How much of this was the tequila and how much was the diet, I couldn’t say. I can say, though, that I didn’t want to be around food or look at food. Some people find they can work while they do the diet, but given my work is food, I found it impossible.

Today I oscillated between feeling well and average. I did manage to go for a small walk, but I couldn’t bear to look at food or smell food again. Brain fog definitely set in, as evidenced by the lack of notes I wrote for the next few days.

Today I was feeling quite good! I managed to get in a couple of walks and even get some work in. Given that I found it hard to look at food, this was impressive for me.

Were a blur. As you can see from the lack of detail in the preceding days, I didn’t have the mental energy or the inclination for writing anything lengthy. This definitely worsened from day 4-6, and I spent my days in bed listlessly watching tv. I oscillated between feeling OK and feeling nauseous and awful, and I had waves of depression over not being able to eat food.

Although I have barely needed to go to the bathroom since I started, I did have a random day of diarrhoea. I have needed a lot of naps and early nights during these few days.

I had a random outburst of maniacal laughter with (sad) tears streaming down my face, twice. You really have to get meals in regularly so as not to your blood sugar drop. I have always been prone to tears when I’m hungry so this probably shouldn’t be surprising.

I also started getting quite dizzy and lightheaded, and was shaky going up and down the stairs.

When I woke up today I felt like I had turned a corner. I don’t want to jinx it because I’m learning that every day brings a new surprise, but I suddenly felt like I had been propelled back into myself. I’ve been planning recipes to develop once I finish the diet, and I feel excited to get back into the kitchen. Looking at food isn’t quite as offensive as it was before.

Today I had a black coffee because I really felt like one. My doctor had said no coffee, but other people online say a black coffee is OK. I figure if little treats like coffee and tea are what get me through then that’s absolutely fine by me.

In thinking I had turned a corner yesterday, I officially jinxed it. I woke up on day 9 assuming I’d feel as good as I did the day before, which was never going to end well. I spent the day in bed napping and was cold all day. Given that I generally have the car air on cool even in winter, being cold is notable for me.

I also had an overwhelming urge to vomit (which I didn’t) while trying to ‘eat’ my dinner, which I haven’t previously had.

I felt quite good today, which I think was because it was my birthday. I got lots of presents and did a lot of online shopping, which distracted me from the shakes.

I have no notes for day eleven because I was in bed all day. I was tired, listless, lethargic and shaky, and realised that I really wasn’t getting enough shakes in.

I had a zoom with my doctor today and made the call to transition to a semi elemental diet. I had been less and less able to get in enough shakes (I was getting exactly half of my recommended dose in) and I was becoming extremely listless and lethargic. Needless to say that was the result of getting inadequate number of calories in.

In an ideal world I would have liked to go longer but I think it was untenable for me to continue. So, I have transitioned to having one ‘real’ meal a day, supplemented by the formula for the remaining meals. I ate dinner (pureed carrots, boiled cabbage and cooked tomatoes with a hard boiled egg) and honestly came back to life.

I was a little bloated after dinner but these days that’s basically what eating is for me irrespective. A lot of people say that their digestive system explodes when they start eating again, but that wasn’t my experience. I felt good and I didn’t have any adverse effects. Never have I been happier to eat a hard boiled egg.

I’m feeling a lot better and a lot more like myself now that I’ve transitioned to eating one meal a day. I decided to eat my real food for lunch, and use the elemental formula either side of that for my remaining nutrition. Having lunch gives me something to wake up for, honestly. I’ve found that I’m bloated after lunch today, but given that my digestion is only recently back from holiday, I hear that is to be expected.

My plan from here is to continue this semi elemental protocol until I’ve been on the diet for 3 weeks. This means I’ll be doing it for 10 more days before moving on to the SIBO bi phasic diet.

Personally, I find the semi-elemental diet very doable. I was having a berry protein smoothie for breakfast prior to the elemental because my protein levels were really low. Having the elemental formula with ice is really just a speedier version of that.

Today I’m starting on Iberogast as a prokinetic, as per my doctor’s instructions. I’m also starting on oil of oregano. This is supposed to discourage the bacteria from recurring in my intestines.

Tips for doing the elemental diet

This will vary depending on which brand you are prescribed, but the taste of Elementall chocolate flavour is not bad at all. It tastes like a sweet chocolate shake with that ‘added vitamin and mineral’ flavour.

The issue I found was that it quickly gets incredibly boring after drinking 8+ a day. Eventually I found it nauseating because I had to drink it so often and it was really quite sweet.

So it’s not necessarily the taste that’s off putting, its that you’re constantly tasting the same thing.

My results after treatment

After finishing the elemental diet and the SIBO bi-phasic diet, I successfully got rid of my SIBO. I felt great for quite a long period of time, and was able to eat more foods without issue. I have vivid memories of gorging myself on hot chips and not bloating AT ALL.

Unfortunately, time ticked on, Christmas rolled around and then I spent a year testing delicious gluten free cakes and croissants for my cookbook. My eating habits fell away, and I have ended up back at square one. And the cycle repeats!

My thoughts on the elemental diet

The diet was undoubtedly very tough for me, but not impossible. 12 days feels a lot longer than it should when you can’t eat. Everyone is different, though, and your experience might be better than mine.

All things said and done, I would do the diet again. It made such a difference in treating my SIBO when antibiotics did not. The pain was worth the gain for me, particularly after doing the elemental and SIBO bi-phasic back to back.

It would be amazing if the makers could invent a variety pack so that people don’t have to drink the same thing for days on end. A savoury dinner version and a few different flavours would have done amazing things for my willpower!

It is now early 2023 and I am back on the SIBO bi-phasic diet. I had two years of baking sugary things for my cookbook and lots of eating holidays. My SIBO is well and truly back, so I need to bring it under control.

I attempted to start the elemental diet again (I have leftover formula from last time) but I got heart palpitations quite significantly. I also started it on a whim because of how bad I felt, which probably didn’t help with my resolve.

So, I am currently on the SIBO bi-phasic diet to see if I can reign it in without the elemental. I feel better in my day to day (although I miss cheese!) I will, of course, update the post when I finish the diet as to whether I managed to address the SIBO without elemental.

I have plans for a whole suite of SIBO bi-phasic recipes as I make my way through the diet. For now, though, here are some to get you started: