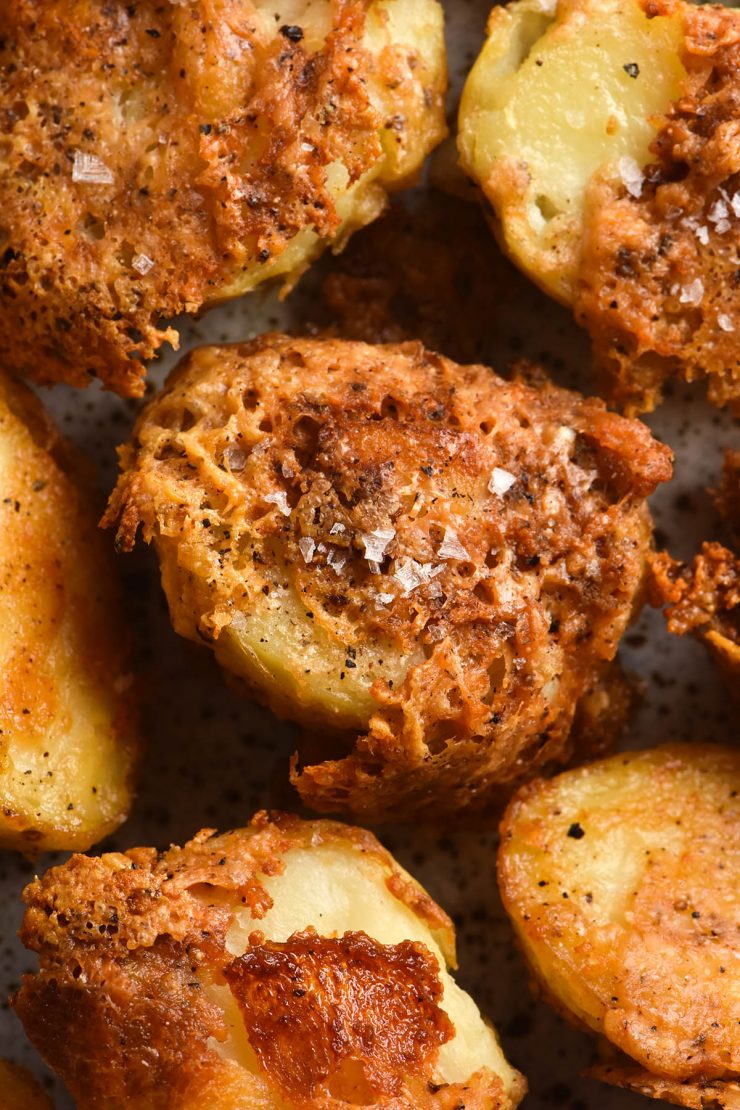 Crispy cacio e pepe potatoes are the love child of my crispy potato recipe and my general enthusiasm for anything cacio pepe related, but also cheese related.

I started experimenting after I discovered vegetarian parmesan (or Gran Kinara) recently. In all but name and use of animal rennet, it is exactly the same as parmesan. It tastes the same, grates the same and melts the same.

A good variety of potato to choose for crispy roast potatoes is an all rounder. These potatoes are the best of both worlds – they are starchy enough to result in a fluffy potato interior, but waxy enough not to turn to mash after boiling and roasting.

The best and most easily available varieties of all rounder potatoes will vary country to country. In Australia, the Sebago (also called white potatoes at the supermarket) is very commonly sold. It’s not necessarily my number one, but it is easily accessible.

Other all rounder or roast appropriate varieties in Australia are:

After you’ve scrubbed your potatoes, it’s time to boil them. Par boiling the potatoes does a few things. Firstly, it introduces the alkaline ingredient (baking soda) to the potatoes. As per this Serious Eats article, the baking soda breaks down the edges of the potato, which will create a starchy slurry that crisps up like a charm in the oven. Think of crispy tofu – the corn flour creates a crispy, shattering crunch one cooked. Same goes for these potatoes.

In the context of these crispy cacio e pepe potatoes, the baking soda trick works a tiny bit differently. Firstly, it helps create the slurry that the parmesan will (hopefully) adhere to. This means less errant parmesan on your tray, and more of it attached to the potatoes.

Secondly, it ensures that the potato flesh stays super soft and moist, even after the potatoes have cooled. These crispy cacio e pepe potatoes become crispier on the outside after a little cooling, so this helps keep the innards delicious.

Getting your potatoes ready to bake

Once your potatoes are done, it’s time to strain them and allow them to steam dry. Steam drying is basically just the potatoes drying off in their own heat – you don’t need to do anything here.

When the potatoes are slightly cooler, slice them into bite sized chunks as you see fit. I like smaller ones for a higher crisp to fluffy innard ratio, but you can cut them how you prefer. I also love crispy potato skins and I do recommend keeping them on here.

The (second) last trick of the day is to add 3 tablespoons of vegetable oil, the parmesan, pepper and 1/2 teaspoon salt to a large mixing bowl. You will need a plate or a tray to cover the mouth of the bowl completely as you shake the potatoes, so choose accordingly.

Add the chopped potatoes to the bowl and pop the ‘lid’ on. Give them a couple of vigorous shakes, then assess. The potatoes should be lightly covered in a mash potato looking starch which will cling onto the parmesan. This will crisp up in the oven beautifully. You don’t want the potatoes to fall apart, but you do want a decent amount of this mash potato starch coating.

Our last trick is to preheat 3-4 tablespoons of oil in a sturdy baking dish before adding the potatoes. Preheating the oil is responsible for creating a shatteringly crisp crust upon the potatoes’ entry into the oven. It ensures that the potato begins to crispy immediately, as opposed to soaking up oil. If you put the potatoes into the oven on a cold oven tray with cold oil, your spuds won’t be nearly as crispy.

I like to preheat my oil for 5 or so minutes. Then, working quickly, remove the oven tray and gently place the potatoes in the oil. It’s important to give them room and not overcrowd the pan – this will result in less crispy potatoes. It’s also important not to cook anything else in the oven while doing the potatoes. Too much food in the oven will create steam, which is the enemy of crispiness

First of all, it’s important to note that not all parmesan is vegetarian. If you need this to be vegetarian, try to find some Gran Kinara (parmesan made with vegetable rennet) or see my post on vegetarian cheese in Australia.

A quick note for those who might be unaware: parmesan (and a lot of cheese varieties) traditionally contain animal rennet, which is derived from the stomach of a baby animals (cows or lamb). Zero judgement on anyone’s eating habits – this is just for people who might be confused at the talk of vegetarian cheese.

The second point on the parmesan is that a pre-grated variety isn’t suitable here. Some sandy-like finely ground parmesan from an Italian deli is fine, but the little strands sold in bags at the supermarket are not. These sorts of cheeses contain fillers which help them keep their shape, but prevent them from melting. No good for your crispy cacio e pepe potatoes. 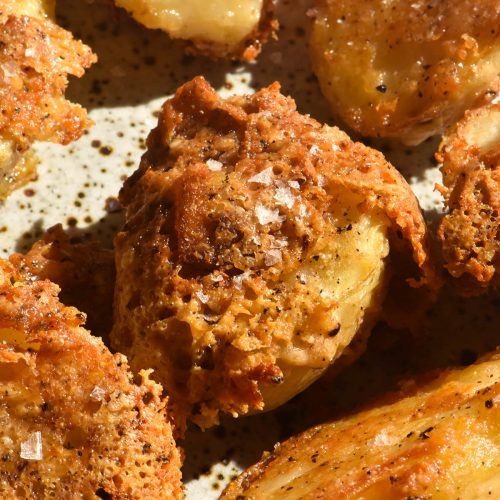 Be the first to rate this recipe
Print Recipe Pin Recipe