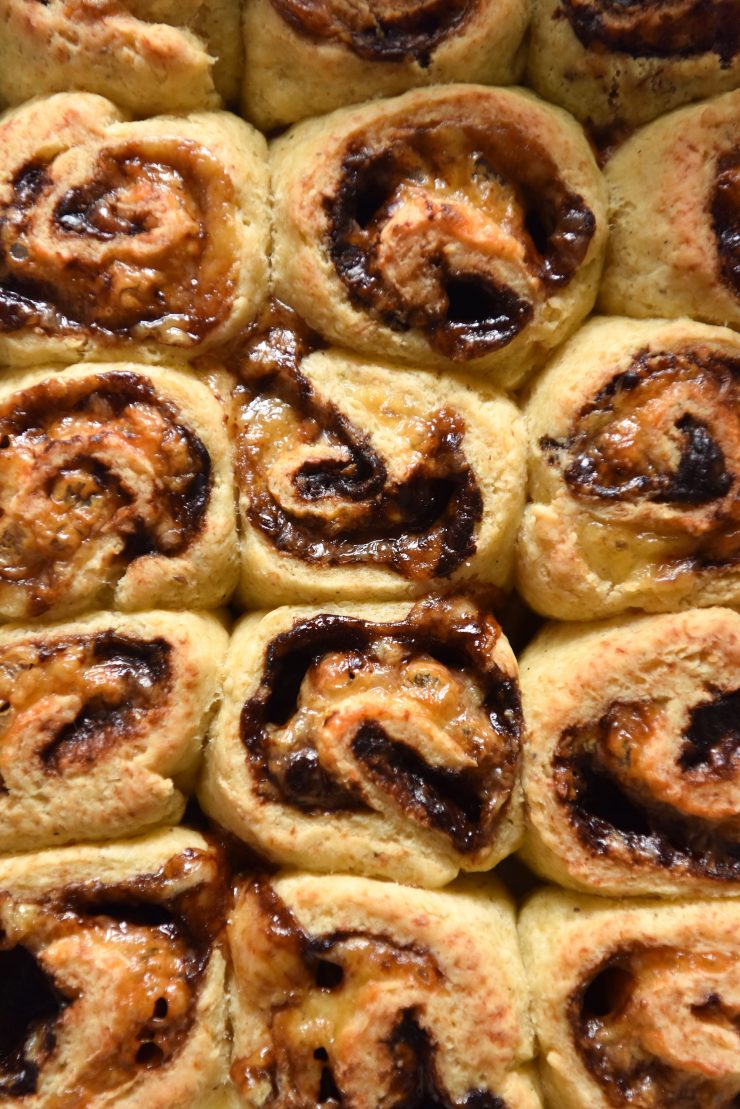 GLUTEN FREE VEGEMITE SCROLLS, GUYS! I mean, I have only been pining for gluten free Vegemite since the day I went gluten free. 6 or 7 years on, it is finally here – Vegemite have released a gluten free version of their quintessentially ‘strayan spread. Here is the insider’s tip: it tastes exactly the same as I remember it.

For a long time, now, I have been substituting with Vegemite substitutes. They are doing their best, but they’re not Vegemite. I dabbled with some scroll recipes, but without Vegemite, I had no motivation to get it done. When the new Vegemite arrived, and Vegemite kindly asked me to develop a recipe for them, I got it done in a matter of weeks. Must be all those Vegemite B vitamins amirite lol lol.

Having been gluten free for 6 or 7 years, I don’t quite remember what the super fluffy, white bread-esque Vegemite scrolls taste like. Gluten free bread isn’t exactly known for being particularly fluffy, after all. These scrolls are moist, delicious, crumby and dense but light. They’re not so fluffy that you’re unsure if you actually ingested anything, but not the little gluten free rock cakes you’ll be familiar with if you are gluten free. These gluten free Vegemite scrolls are the perfect harmony.

Obligatory FODMAP talk time. Firstly, it should be noted that I choose not to use flour blends or gums in my baking. I don’t like gluten free flour blends because I find it hard to believe that the results can be guaranteed when flour blends vary so wildly. They contain so many different flours, and some flours just aren’t suited to certain types of baking. I once bought a bag of gluten free flour whose main ingredient, as it transpired, was chickpea flour. That was not a fun FODMAP time.

I don’t use gums in my baking because I’ve read that a lot of people with digestive issues can struggle with guar and zantham gum. I prefer to use psyllium, which is super natural and basic. It might not work as well as a gum, but I’m happy to sacrifice a bit of elasticity for digestive health.

Obviously, I have used gluten free Vegemite in this recipe, and you should too. I used a sharp, freshly grated cheddar (I NEVER recommend pre-grated) but you could also use a lactose free cheese brand. Monash posit that cheddar only has trace FODMAPs and dairy detected, but you do you boo.

I have used a soy milk derived from the protein, rather than the bean. You could also use lactose free dairy milk, or a thick, creamy plant milk of your choice.

Some tips to get you on your way to gluten free Vegemite scroll heaven:

To make into Vegemite scrolls