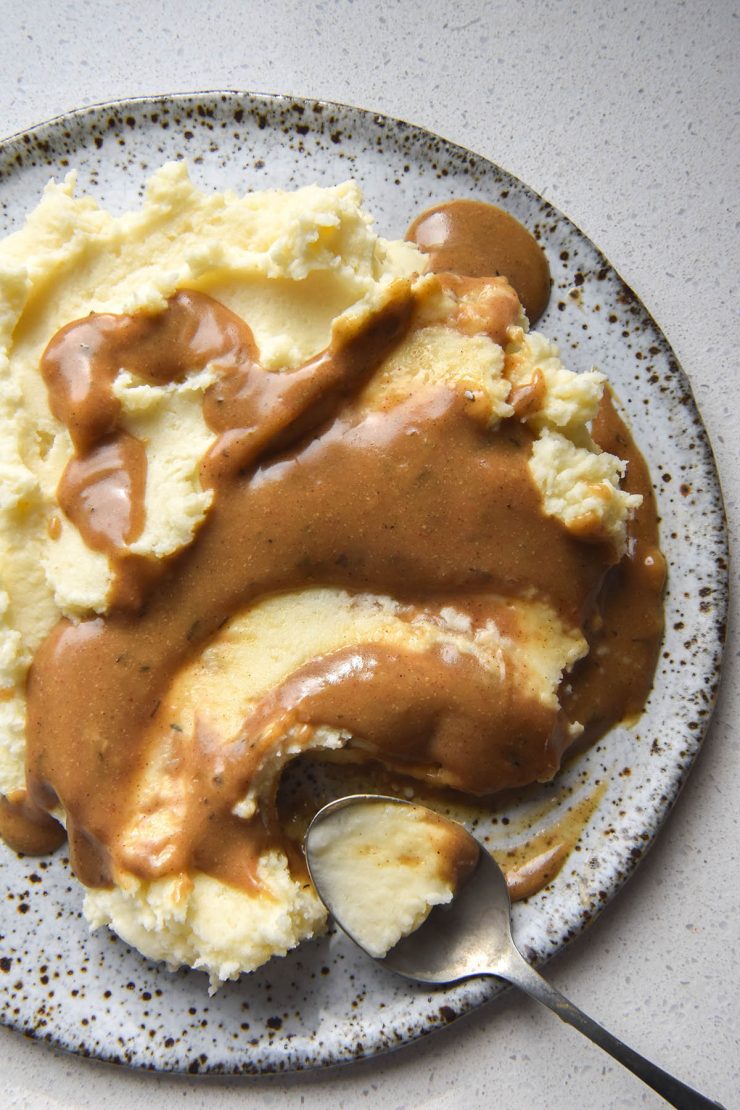 Firstly: this gravy is wholly inspired by this recipe that my Mum made for me recently. It was so astonishingly meaty to me, particularly given that it had taken her 5 minutes to make.

The toasted nutritional yeast is a critical component of this FODMAP friendly vegan gravy. I don’t recommend omitting it. It is worth noting, however, that it does leave tiny little white flecks in the gravy. Nothing to be concerned about, and nothing to be done. I have tried soaking the nutritional yeast in the broth prior to use. I have also tried blitzing it in my spice grinder before use, all to no avail. It is only noticeable if you look closely.

All store bought broths have different salt levels, so it’s hard to say with any certainty how salty your gravy will turn out. I recommend buying a salt reduced option if you can. This way you can better control the salinity.

On the note of broth, there are (in Australia, at least) FODMAP friendly options out there. I love Massell (who are certified by Monash) and I love using their plant based beef stock in this FODMAP friendly vegan gravy. All of the meaty flavour without any meat.

Dried thyme and dried sage powder go such a long way to adding depth of flavour in this recipe. I really recommend including them.

Which starches can I use to make gluten free gravy?

I’ve tested potato starch and cornflour/starch in this FODMAP friendly vegan gravy. Personally, I find potato starch far superior. It thickens way more and adds a realistic consistency to the gravy. I really recommend the potato starch option. Corn starch also works, though, if that’s all you have.

In my experience, tapioca flour made for a really gloopy, unpleasant thickener in roux and I don’t really recommend it.

Recipes to serve with your FODMAP friendly vegan gravy 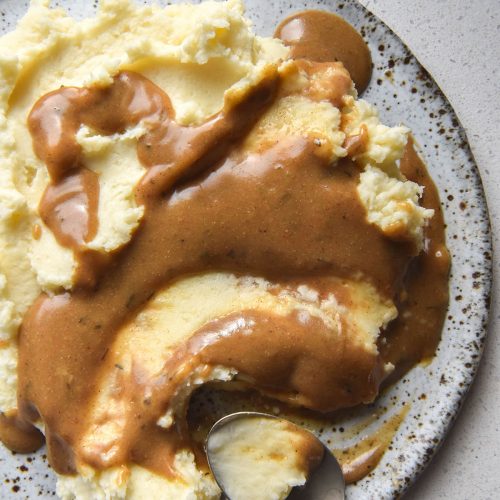 Gravy made with starch tends to thin out and separate if you make it ahead of time. Because it’s so quick to make, I recommend making it right before you need it.
Keyword gluten free vegan gravy, vegan gravy
Tried this recipe?Let us know how it was!